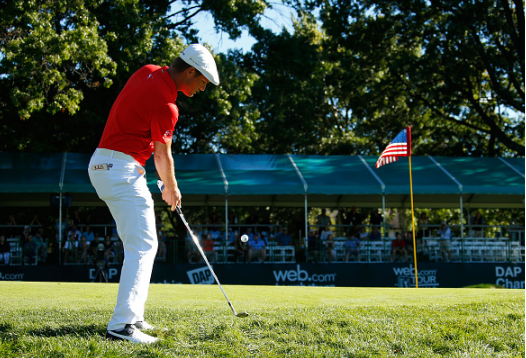 In today’s PGW Daily, the Web.com Finals are finished, Joost Luiten shows how to celebrate a win, and Colt Knost wins the Twitter exchange game.

A large field of Web.com and PGA Tour players competed at the DAP Open, the first event of the four-tournament finals. The top 25 in the standings after the finals will earn their PGA Tour card for next season.

The DAP was won by Bryson DeChambeau, the 22-year-old who made headlines when he finished T4 at the RBC Heritage, his first event as a pro. He did not do well enough for the rest of the season to earn his card, but after winning the DAP (his first Web.com event), he has guaranteed that he will be on the PGA Tour next season. He came out victorious in a four-man playoff.

Notables from the DAP:

This week’s LPGA event is the Evian Championship, the fifth and final major of the year. Those in charge at Evian have tried to personalize the experience. They had this for Suzann Pettersen.

How can I buy super bowl tickets now? @ColtKnost

Funny post from a fan: “@Keegan Bradley @ColtKnost Where do i buy my web.com tickets to watch you play in two years?”

Preview Video of the Day

Speaking of the Evian Championship, the LPGA put out this preview video to get fans caught up and hyped.

The final major of the season is here! Check out this preview of the @EvianChamp!

Trophy of the Day

Joost Luiten won the European Tour’s KLM Open over the weekend. He now has two of these trophies.

Thanks to everybody who supported me last week! It was unbelievable and very proud to have 2 of these now? #KLMopen pic.twitter.com/Ut5U2hRwRu

Luiten won what is considered his home tournament, shooting a final round 63, tying the course record, and winning by three strokes over Bernd Wiesberger.

Celebration of the Day

Joost Luiten parties after his win at the KLM Open. The tournament was played in his home country of the Netherlands.

Joost is on fire after the Dutch Open this weekend! pic.twitter.com/jcEvNElTbr

Danny Willett spending some quality gym time with his son.

Nice work this week @b_dechambeau! I'm calling ur agent now to set up a round this fall. #TOURBound #bigtimer ?

Driving irons do not get as much press as they should (unless you’re Ariya Jutanugarn), but this utility iron from Cobra was used by DAP Winner Bryson DeChambeau.

Another #CobraKING takes the throne.