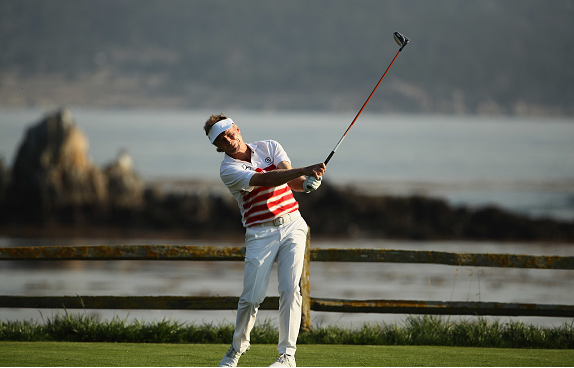 It is an exciting Friday in professional golf. The PGA Tour is in Atlanta for the Tour Championship, the final round of the FedEx Cup playoffs. Dustin Johnson appears to be in the driver’s seat for the victory, but there are many elite players nipping at his heels.

The Web.com Tour is in Columbus for the third round of the Web.com finals, with the top 25 on the money list for the four events winning their PGA Tour card for next season. In today’s PGW Daily, we look closely at both of those events. We also talk Ryder Cup shirts, Porsches in Germany, and show you the luckiest little kid ever.

Except for the 30 players at the Tour Championship, plus Brooks Koepka (Koepka made the Ryder Cup team but not the Tour Championship) and maybe Jim Furyk, the season is over, at least until the Fall Series opens up next month (be prepared for a LOT of Tiger talk). Billy Hurley III, one of the breakout stars of the 2015-16 season, is spending that time getting his body in better shape.

Off season workouts have begun. Only 2.5 weeks till the new season starts! #keepgettingbetter #kgb pic.twitter.com/pL8QWFVYjJ

As a Navy grad, Hurley III likely knows a thing or two about workouts. This clip showed mostly core and leg work. The exercise where he was holding two kettlebells is called a Farmer’s Walk, which is widely recognized as one of the most beneficial leg exercises.

Hurley III came out of seemingly nowhere (no top-40 at that point) to win the Quicken Loans National. From that victory in late June, until the end of the season, he only missed one cut with a high finish of T8 at the Deutsche Bank Championship.

Steve Wheatcroft wanted to thank his caddy (or whoever “my looper Zu” is) for the extra work he put in yesterday.

Gotta thank my looper Zu for raking the 13 (yes 13!!) bunkers I hit it in today. Hope your shoulder recovers by tomorrow. #stillunderpar

It was a tough season for Wheatcroft, who finished 137th in the FedEx Cup Standings, but he showed signs of improvement late in the year with T5s at both the Barracuda Championship and the RBC Canadian Open. He is currently trying to get his PGA Tour card through the Web.com finals. Through one round of this week’s tournament, the Nationwide Children’s Hospital Championship, Wheatcroft is one-under, five strokes back of leader Whee Kim.

Bernd Wiesberger, whose 63 in round one kept him just one back of Alexander Levy’s lead, was scheduled a later tee time at the Porsche European Open in Germany, which has had multiple fog delays over the first two rounds. He was sent this text, by the Tour.

Unfortunately no play for me today… At least fresh Greens in the Morning tomorrw! @eogolf @EuropeanTour pic.twitter.com/286SUbIdF9

It looks like Wiesberger will have a lot of golf to catch up on tomorrow. He is in good form as of late, finishing solo-second at the KLM Open two weeks ago.

Fan of the Day

Golf fan Deryk Thomsen is getting excited about his trip to Hazeltine to watch the Ryder Cup. For the event, he printed up a shirt:

Rickie Fowler made the squad as a Captain’s Pick, while Kaufman did not make the team. There will likely be a lot of special fan shirts at the event.

Scott Stallings was trying to keep up with two events last night, the New England Patriots improbable 27-0 win over the Houston Texans and the Boston Red Sox 5-3 victory over the Baltimore Orioles.

Stallings, a former winner on Tour, had a rough second half of the season, missing 12 of his last 19 cuts to fall just three spots short of the FedEx Cup playoffs. He has secured his PGA Tour card for next year via a great performance over the first two rounds of the Web.com finals: a T6 in the first round, and a T5 in the second round.

Andrew ‘Beef’ Johnston, the extremely popular Englishman who is having a breakthrough season, struggled in the first round of the Nationwide Children’s Hospital Open, the third leg of the Web.com finals.

When u have a tough day u need extra laughs so I'm gonna watch sausage party ???

As he often does, Beef took the round in good spirits and decided to take in a movie at Easton Town Center, one of the world’s largest malls. With his T4 last week, Johnston has secured his PGA Tour Card for next year, but was hoping to keep the quality golf going in Columbus.

Legendary PGA Golfer Ernie Els wanted Tour Commissioner Tim Finchem to know that he appreciated the work he did during his tenure. Finchem, the commissioner for 21-years, is retiring at the end of the season.

Congrats #commissionerfinchem on a great tenure @PGATOUR enjoyed our differences and you were the right man for the job ??

Els has won 19 times on Tour, with four of those coming in major championships. At 46 years of age, things have become more difficult for Els in the golf world, as he has just one top 10 over the past two years. He contended at the Quicken Loans National, but was unable to keep that good play going over the last few months of the season.

The Challenge Tour, basically Europe’s version of the Web.com Tour, put out a great video this morning highlighting Tommy Fleetwood’s victory five years ago at the 2011 Kazakhstan Open. It shows a lot of views that would not be familiar to the average PGA Tour fan.

WATCH: How it's done

Fleetwood is coming off of back-to-back top 10s on the European Tour, and is currently 65th in the Race to Dubai standings.

A very young golf fan had a great day at the Tour Championship yesterday.

The lucky kid was given golf balls by Jason Day, Dustin Johnson, and Adam Scott, three of the most likely players to win the FedEx Cup’s $10 million prize. The players on Tour have a good reputation of helping kids feel a part of this action, but this kid got a special amount of attention.

After spending last week at Pebble Beach, the Champions Tour headed north to British Columbia for the Pacific Links Bear Mountain Championship. The defending champion is Paul Goydos, but like every other Champions Tour event this year, the man to watch is Bernhard Langer.

Langer, in the midst of a historically great season, is coming off three straight top-2 finishes after a T2 at Pebble Beach, one back of Paul Broadhurst. Langer has finished in the top 3 in 9 of 17 tournaments this year, a mind-boggling stat. Langer has earned $2.4 million on the year, nearly double the amount that the #2 on the Schwab Cup Money List (Joe Durant) has.