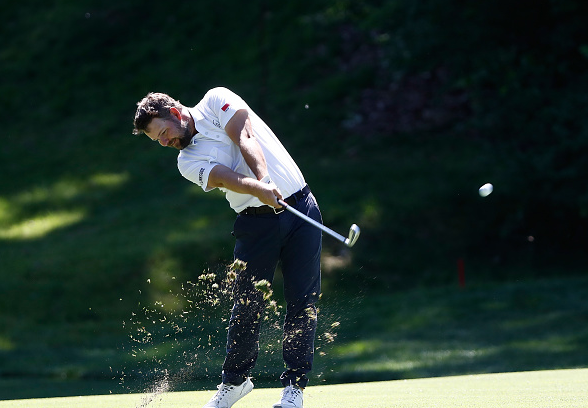 In today’s PGW Daily Rundown, Rory receives acknowledgement of his riches, but stays humble, even holding a trick shot contest for fans; Erin Hills will be without Ryan Moore or Geoff Ogilvy; and a women’s college golfer at Duke becomes a two-time Annika winner.

At last year’s U.S. Open, the title was captured by Dustin Johnson, one of the best players in the world without a major victory. If the trend is going to continue at Erin Hills next week, it won’t be Ryan Moore who finally breaks through on the major stage.

The 34-year-old majorless American was forced to withdraw from his spot at the U.S. Open after a shoulder injury put him on the sideline for a month.

“While the strained shoulder is a minor injury, Ryan’s doctor recommended he take time off to let it heal. He is expected back at full health.”
–Jeremy Moore, brother and manager

For years, professional golfers have held high positions on the annual Forbes’ list of highest-earning athletes in the world, with Tiger Woods dominating the top of the list until fairly recently.

The new Forbes list came out earlier this week, and while several golfers are in the top 100, just one made the top 10: 2016 FedEx Cup Champion Rory McIlroy, who came in at sixth.

“Luckily, that amount of money doesn’t sort of mean much to me anymore.”
–Rory McIlroy in 2016 after winning the $10 million FedEx Cup Champion Bonus.

The Rory Foundation, the charity founded by world #2 Rory McIlroy has conceived a unique opportunity: a trick shot contest.

McIlroy took to social media recently to announce the contest, which calls for anyone interested to take a video of their best trick shot and upload it to Twitter with the hashtag #RoryTrickShot. The winner will receive a spot in a European Tour pro-am event.

We're giving one lucky golfer a chance to play in the Pro Am at the @DDFIrishOpen. Here's @McIlroyRory on what to do to enter #RoryTrickShot pic.twitter.com/BLgkhJUJP1

Australia’s Geoff Ogilvy won the 2006 U.S. Open at Winged Foot with a score of five-over-par, taking advantage of 72nd hole collapses by Phil Mickelson, Colin Montgomerie, and Jim Furyk on his way to his first, and only, major championship victory.

For winning, Ogilvy was granted a 10-year U.S. Open exemption, which ran out last year. Ogilvy’s career has stagnated since the 2012 season, and the eight-time Tour winner has struggled to qualify for the biggest events. One more he will not be playing: the 2017 U.S. Open.

Ogilvy passed up a chance to qualify via sectionals, instead deciding to use the week to rest, potentially a wise decision given his tenuous hold on his PGA Tour card.

While the LPGA is certainly not lacking in young talent, it may not be long before they get to boast another teen superstar.

Leona Maguire, a junior at Duke University, won the Annika Award, one of the most prestigious honors in college golf, for the second time in the past three years.

Nearly turning pro after last season, Maguire opted to play one more season at Duke, one in which put together another phenomenal season. She finished the season #1 in the women’s college golf rankings.

“She is probably the smartest player I have ever coached.”
–Dan Brooks, Duke golf coach