Dustin Johnson fired a 7-under 64 on Friday and will head into the weekend at Pebble Beach holding a share of the lead with Beau Hossler at 12 under. 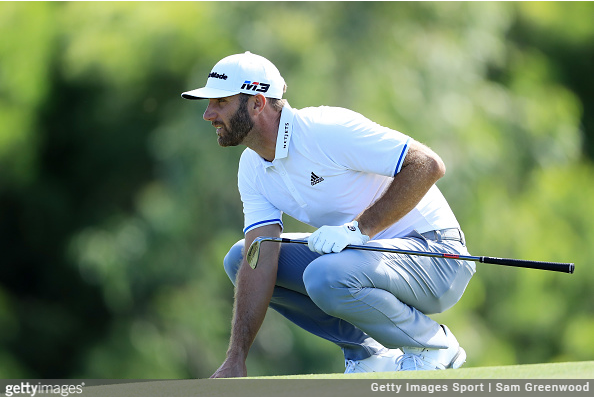 The World No. 1, who started the day two back, made noise immediately at the Monterrey course with three-straight birdies (Nos. 10-12). After a bogey on his sixth hole (No. 15), Johnson carded five more birdies over a seven-hole stretch en route to a low-round 64.

“I’m in a really good position here starting the weekend, but still got two rounds at Pebble which is probably my favorite out of the three courses and I really like playing there, it sets up well for me,” said Johnson.

“But I’m still going to have to go out and shoot a good score tomorrow at Pebble if I want to be in contention on Sunday.”

Hossler, the overnight co-leader, continued to impress on Friday and finished his second-straight day bogey-free with five birdies, highlighted by three red numbers on the par-5s.

“It was a solid round. Got the ball in play nicely off the tee, got myself some good birdie looks and kind of tried to take advantage on holes that were gettable today and try to make pars on some of the really tough par-4s out there,” said Hossler.

On the other end of the spectrum, three of the tournament’s headliners – Jason Day (65), Phil Mickelson (65), and Jon Rahm (67) – each posted bogey-free rounds and lead a group of six tied for fifth at 9 under.

“It was a fun day and I love Monterey Peninsula. The fairways are wide and they feel pretty easy to hit. I hit a number of fairways and was able to make a lot of birdies,” said Mickelson.

“It’s fun to be in the mix, it’s fun to go over to Pebble Beach now and play two rounds on the weekend knowing that I have a chance and being in the thick of it. It’s just a fun place to play well.”

The all-star trio is joined by Steve Stricker (65), Aaron Wise (69), and first-round co-leader Kevin Streelman, who posted a bogey-free 2-under 69.

Defending champion Jordan Spieth bounced back on Friday, and finished with a 5-under 67 to move up 75 spots to T23. Meanwhile, Rory McIlroy went the other way, and followed up a first-round 68 with a second-day 74 to plummet 71 spots to T87.

Through two rounds of play.