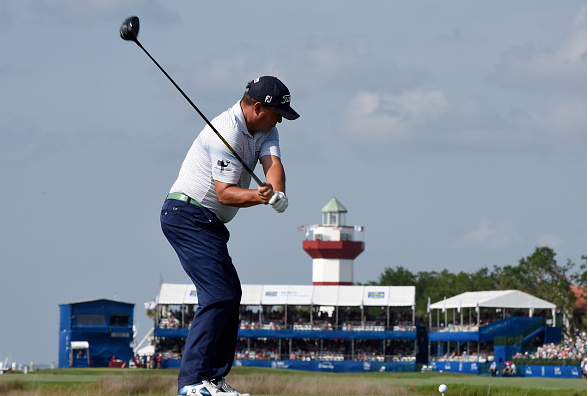 LeBron James is undoubtedly the Cleveland native getting the most attention today, as his Cavaliers opened up their playoff defense of their much-celebrated 2016 NBA Championship. As always, Playoff LeBron was formidable, scoring 32 points, while adding 13 rebounds and 6 assists in a one-point Cavs win.

LeBron, however, may not even have had the best athletic performance among Clevelandites on Saturday, as another native of the NE Ohio metropolis, 40-year-old PGA veteran Jason Dufner put together a dazzling third round at the RBC Heritage on Hilton Head Island.

The former PGA champion carded five birdies and two eagles on his way to a low-round 6-under 65, and grabbing the lead at the RBC Heritage after 54 holes.

Dufner is at 13-under, and leads 36 hole co-leadar Graham DeLaet by a stroke. Kevin Kisner and Webb Simpson are tied for third at 11-under, while Ian Poulter rounds out the top-5 at 10-under.

Dufner had the best round of the day despite three bogeys, which well illustrates just how incredible he was on the other 15 holes. His front nine epitomized “roller coaster round”, as he played his first five holes bogey, eagle, bogey, par, eagle, with the second eagle coming courtesy of a 99-foot pitch-in.

After adding one last bogey on #7, Dufner carded back-to-back birdies on 9 and 10, and did even better adding three consecutive birdies on 14, 15, and 16, with pars on the rest. Another strange thing about Dufner’s round: it was his lowest score of the week, even though he hit the fewest number of fairways and fewest number of greens in any of his rounds this week, a testament to how well he putted Harbour Town’s notoriously small greens.

If he can hold on Sunday, it will be his fifth career victory, and first he won the CareerBuilder Challenge just over a year ago.

Playing Themselves Into Contention

Kevin Kisner has been on a furious comeback since his disappointing opening-round 72 (+1). His seven-under 64 in round 2 was the lowest round in the Friday field, and he kept that heat going into Saturday, posting a five-under 67 that tied for second-lowest in the round 3 field.

Kisner was bogey-free for the second consecutive day, and is now just two strokes out of the lead in his latest attempt at a second career PGA Tour victory. One of those who tied Kisner’s 67 was

J.J. Spaun, a Tour rookie who has already contended twice this year, finishing T9 at the Farmers Insurance Open at difficult Torrey Pines and T4 the following week at the Waste Management Phoenix Open in Arizona.

Billy Hurley III made a ton of fans during his surprise 2016 victory at the Quicken Loans National, but has just one top 10 in 20 events since. After his five-under 67 in round 3, he has put himself in a position for another high finish. At -7 for the tournament, he is six strokes out of the lead, giving him an Easter prayer is he can go low on Sunday.

Pat Perez has had a tremendous 2016-17 season, with a victory at the OHL Classic in addition to three other finishes inside the top 7. He kept that good form going into this week too, as he was -7 through two rounds, just three strokes out of the lead.

However, there are not many positive adjectives that can be accurately used to describe his third round, an atrocious 10-over 81 that was the worst round in the field by six strokes.

Luke Donald is looking for his first RBC Heritage victory after an unbelievable amount of close calls, but he could only muster one birdie in his round 3 one-over 72 and dropped from a tie for the lead into a tie for 6th. He is not out of it, but if he doesn’t go low on Sunday, he is probably looking at another high-finish non-victory.

Sam Saunders shot a 65 in round one, but had one of the worst rounds in the field in round 3, a three-over 74. Five bogeys and a double bogey more than cancelled out his four birdies.

“The front nine was a little bit of a roller coaster, but it was good to pick up a couple of eagles, that’s always nice, to kind of even it out. The back nine was really clean, I was really happy with how I played on the back nine. Hopefully that will bode well for tomorrow in the final round.”
–Jason Dufner, Round 3 leader