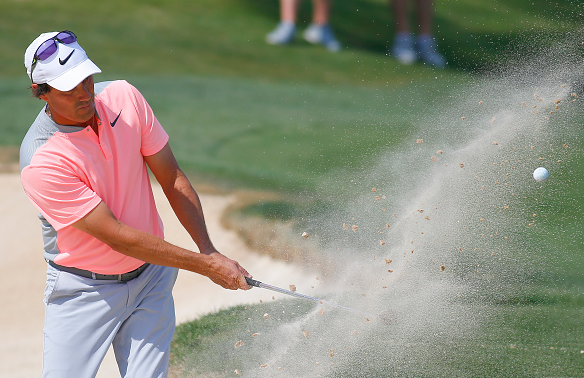 Stephen Ames started the day two shots back of the lead at the Mitsubishi Electric Classic – tied for the third position with a group of six. But after a 4-under 68 in round two at TPC Sugarloaf, the 52-year-old Canadian is all alone at the top of the leaderboard at 9-under-par.

While Ames is on top, the leaderboard is still bunched up with 19 players within four shots of the lead, including five players tied for second at 8-under.

Round-one leader Bob Tway and Kenny Perry, who fired the best round of the day, are two of the five at 8-under. The others are Billy Andrade, Brandt Jobe, and Kevin Sutherland.

David Frost was also at 8-under, with one hole to play – the par-5 18th. A birdie by Frost on 18 would have given him a share of the lead. Instead the usually reliable South African made a double bogey-7 and dropped down to 6-under, tied for 9th.

This is the birdie putt that gave Ames the lead on the final hole.

We have a new outright leader at the @MEClassicGolf!@StephenAmesPGA. pic.twitter.com/14hAxppxWV