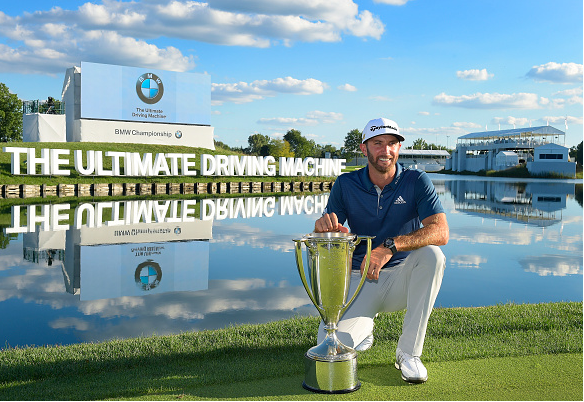 The final round of the BMW Championship felt like two tournaments happening simultaneously. At the top of the leaderboard, there was a duel between Dustin Johnson and Paul Casey, who separated themselves early from the pack.

The rest of the field was locked in a tight battle for their playoff lives, with only the top 30 in the FedEx Cup standings getting to play in the Tour Championship in two weeks. Tournament #2 was defined by a logjam at 4th place that had implications for many in the field. It ended with Charl Schwartzel and J.B. Holmes moving on, and fan favorite Rickie Fowler moving out.

Tournament #1 meanwhile, was another display of the dominance of Dustin Johnson. Casey made things interesting at two points, but in the end, it was Johnson once again claiming victory. With the win, DJ moves to #1 in the FedEx Cup standings, and basically cements his status as PGA Tour Player of the Year.

The top five in the FedEx Cup standings going into the Tour Championship automatically win the entire playoffs if they win the event.

Those who finished in the top 30 move onto the Tour Championship at East Lake in Atlanta. Those below the top 30 are eliminated.

Other Notables Eliminated From the Playoffs

Paul Casey was able to tie Johnson at the top of the leaderboard after DJ bogeyed holes 2 and 3, but the Johnson did what we have seen him do so many times: he put the gas pedal to the floor. He birdied 4, 5, 7, and 8 to go out in -3, and separate himself from Casey.

Casey got the deficit back to one when he eagled #15, but that was short-lived, as DJ nailed a putt for eagle on the same hole to extend the lead back to three. DJ finished at -23, three strokes clear of Casey, who took runner-up honors for the second consecutive tournament.

What This Means For DJ

With this victory, DJ moves to the top of the FedEx Cup standings. With every part of his game clicking, he is going into the Tour Championship very confident, something that should strike terror into the 29 other players in the field.

The only players who would automatically pass DJ with a win in Atlanta are Patrick Reed, Adam Scott, Jason Day, and Paul Casey.

Casey’s runner-up finish moved Deutsche Bank winner Rory McIlroy out of that top 5. McIlroy would still most likely take the title with a win, but it would require an unlikely nightmare round from DJ.

The battle among the FedEx Cup bubble was intense. Charl Schwartzel could not have picked a better time to have his round of the year: a bogey-free, 8-under 64. Schwartzel started the week 43rd, but the round moved him into that #30 slot that many had their eyes on. Rickie Fowler, who was over par for the tournament was the unfortunate golfer to finish in that #31 slot.

Among those who started the week outside the top 30, Schwartzel, Roberto Castro (53rd to 21st), J.B. Holmes (42nd to 28th), and Daniel Berger (31st to 26th) were the only ones to play themselves in for the Tour Championship. To make room for them, Fowler, Sergio Garcia, Brooks Koepka, and Henrik Stenson were eliminated.

Stenson did not play this week, choosing to rest a knee injury in hopes of being ready for the Ryder Cup, and maybe the Tour Championship, had he qualified for it. Another note about J.B. Holmes, who did not qualify automatically for the Ryder Cup: his T4 is likely to have made a positive impression on American Ryder Cup Captain Davis Love III, who makes three of his four wild card picks tomorrow morning.

“I got a lot of confidence in every part of my game, especially all the work I put in on my wedges, it has really paid off this year, and this week, the putter really worked. I put in a new putter, I played with the Spider and it really worked this week”
–Dustin Johnson, BMW Championship winner.