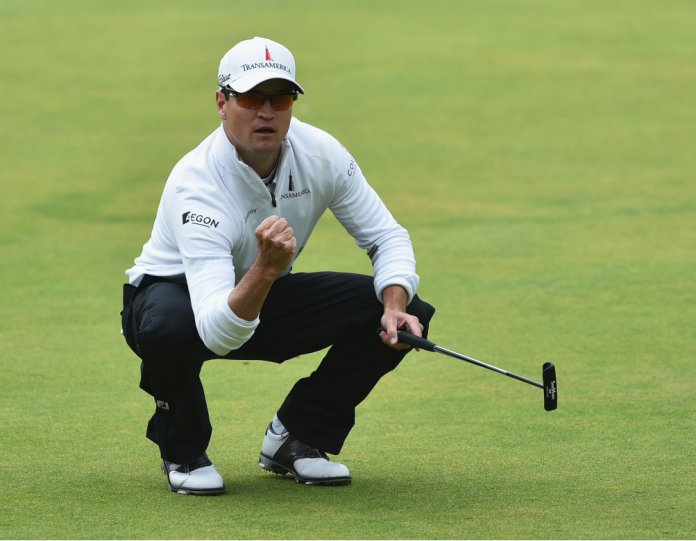 Round number two of the 145th British Open kicked off this morning while most golf fans in the states were sound asleep. The day started out much calmer than expected with little or no winds. But the rain picked up later, and caused some trouble throughout the day (in Scotland).

Here’s a quick Twitter recap of what’s happened so far.

In response to the terrorist attack in Nice, France, the French Flag has been flying at half-mast since this morning.

French flag on the 18th grandstand at half-mast today following the attacks in Nice. #TheOpen pic.twitter.com/jEnSudZ7Ko

Phil Mickelson started the day exactly where he left off. He made three birdies on the front nine and was actually bogey-free through 11 holes. He made his first bogey of the championship on the 12th. He added another birdie on the 14th before making his second bogey on the 15th. He parred the final three holes and is the current clubhouse leader at 10-under, 132.

If there is anyone who enjoyed the early morning conditions, it was Henrik Stenson. The curent World No. 6 shot a fantastic 6-under 65, which included a bogey-free 3-under on the back nine.

There were plenty of players who took advantage of easy early morning conditions. 2011 Masters Champion, Charl Schwartzel was one of them, shooting a 5-under, 66.

Early movement up the leaderboard for Schwartzel this morning #TheOpen https://t.co/AwjPIIu5xn pic.twitter.com/H0Ig7zkuAV

Soren Kjeldsen from Denmark was the early clubhouse leader at 7-under, 135. He shot a 3-under 68 this morning. Quite surprisingly, he didn’t make a bogey today.

Soren Kjeldsen finishes with a bogey-free 68 and is 7-under-par overall. https://t.co/AwjPIIu5xn #TheOpen pic.twitter.com/M9TitoZOUM

Martin Kaymer was another player who made the most of the easier nine, shooting a 3-under, 34, on the front nine. He then triple-bogeyed the 10th and had a bogey on 11th. He finished his round at 3-under through 36 holes. Here’s his tee-shot at the “Postage Stamp” 8th.

So close for Kaymer on the Postage Stamp! #TheOpen pic.twitter.com/B70P7aeACS

Defending champion, Zach Johnson went out in 3-under par, highlighted by this chip-in birdie on the 2nd hole. But ZJ would bogey two of his final 4 holes to finish at 1-under 70. The 2-time major winner sits at 5-under through 36 holes, and tied for 5th.

Looking for his first major championship, Lee Westwood pretty much shot himself out of the tournament with a 2-over this morning. He is 2-over for the tournament and is outside the cut-line at the moment.
https://twitter.com/FoxSportsGolf/status/753927888114626560

Another player looking for his first major championship, Matt Kuchar made quite a move today, shooting a 3-under to add to his even par round from yesterday. Since Jordan Spieth decided to withdraw from the Olympic team, Kuchar will be replacing him.