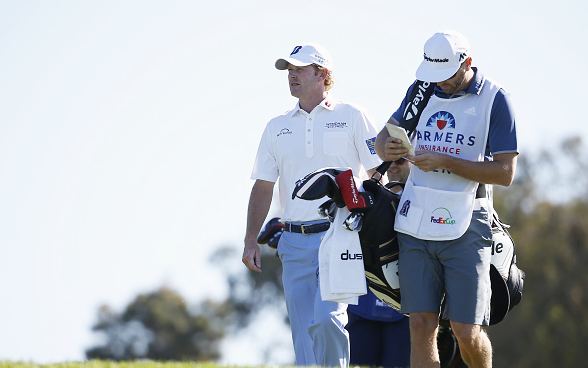 PGA Tour caliber courses are never easy, but we have seen a lot of very low scores the past two weeks – including back-to-back 59s.

Here are just a few of the lowest rounds:

In both tournaments, in addition to the SBS Tournament of Champions the week before the Sony Open, the winning score was -20 or lower. It certainly raises the confidence of players in the field, but is not a paradigm generally loved by golf purists.

For those people, there is a remedy: Torrey Pines Golf Course.

Well known as one of the most brutal challenges in professional golf, Torrey Pines brings out the Tour elites and puts them through the wringer.

It is also the host site of the Farmers Insurance Open, which takes place this week. For perspective, last year’s winner, Brandt Snedeker, finished the tournament at just 6-under par. Granted, the weather was unbelievably bad in the final round, with Snedeker posting the only under-par round, but taking the whole week into consideration: the low round of the week was Derek Fathauer’s second round 65.

The year prior, the winning score was Jason Day’s 9-under par, with the low round of the week being Nicholas Thompson’s first round 64 (he would go on to finish +3).

On top of the greater challenge, which many fans will find refreshing, this year’s edition of the Farmers Insurance Open is bringing a phenomenal field, easily the best we have seen since the Ryder Cup.

The intriguing storylines coming out of Torrey Pines are numerous, with the best of those being the inclusion of Tiger Woods – his first official PGA Tour event in 17 months.

The Farmers Insurance Open, originally called the San Diego Open, has been a part of the PGA Tour since 1952, with this year’s edition being the 64th all time.

Woods has won an unbelievable (well, it would be unbelievably for anyone else) seven times, easily the most of anyone in the tournament history, with Phil Mickelson being next with three wins. Woods also won at Torrey Pines in 2008, when it was the host of the U.S. Open, a tournament that is mostly famous for being Woods’ last major win.

The Farmers Insurance Open is also famous for having Andy Williams as a tournament host from 1968-1988. It is believed to be the favorite tournament of Nelson Muntz.

Brandt Snedeker is the defending champion of the Farmers Insurance Open. Snedeker won at Torrey Pines in come from behind fashion, making the cut on the number after an underwhelming 73-70 start. In a final round, highlighted by hard rain and heavy winds, Snedeker was the only player in the field to post under-par.

Much of the field was forced to finish their round on Monday, and by the time play it was all said and done, Snedeker’s -6 was enough to take the trophy – winning by a single stroke over K.J. Choi.

It was Snedeker’s second career win at the event, as he also took the 2012 title in a playoff over Kyle Stanley.

Lowest Final Score: The lowest final score at the Farmers Insurance Open was a 22-under 266. It was done twice, first by George Burns in 1987 and then by Tiger Woods in 1999.
Low Round: North Course- 61 (Mark Brooks, Brandt Snedeker), South Course- 62 (Tiger Woods)

1.The Return of Tiger Woods to the PGA Tour

As is true every time he tees up, most of the attention the Farmers Insurance Open gets will be from those interested in watching Tiger Woods, the 14-time major winner, and long-time world #1, who has fallen all the way to #663.

This will be the first official PGA Tour start for Woods in 17 months, with his last action being a T10 finish at the August 2015 Wyndham Championship, taking a lengthy absence to recover from back surgery.

Technically, this will be Tiger’s second competitive golf tournament since the extended absence. In early December, he competed in his own Bahamas Tournament: the Hero World Challenge. The results were mixed. His final position, 15th in the 18-man field might not have been especially impressive, but a bogey-free seven-under 65 in the second round had to be an enormous confidence builder. For at least one round, he looked like he still had it. Even his final round 76 included five birdies; his bad holes were just very bad (three double bogeys).

Making his return at such a notoriously difficult course has raised some eyebrows, but Tiger has absolutely dominated this tournament in the past. He has seven victories at the Farmers Insurance Open (in addition to several other high finishes), plus an additional Torrey Pines victory when he ousted Rocco Mediate in a classic 19-hole playoff at the 2008 U.S. Open.

That being said, it has been a long time since we have seen vintage Tiger Woods, so even at Torrey Pines, expectations should probably be tempered. Late in the 2014 season, Tiger missed the cut at the WGC-Bridgestone Classic not long after returning from an injury layoff, despite having won the tournament eight times previously.

As impressive as Brandt Snedeker’s victory at the 2016 Farmers Insurance Open was, particularly his final round where he lapped the field in terrible weather, it was not unexpected. He finished 16-under par in his 2012 victory and once shot a tournament-tying record round of 61 in 2007.

In ten full-time seasons on the PGA Tour, he has eight victories and won the FedEx Cup in 2012. The 36-year-old’s talent has never been in question; the issue for him has been majors, where he has never won, and has had several high-profile meltdowns. He has shown the ability on big stages however, and it has lead many to believe that his time is coming soon.

Snedeker’s 2016 season was another successful one. In addition to the victory in La Jolla, he finished inside the top-10 seven times, including four times inside the top-3.

The Nashville native was a bit up-and-down over the second half of the season after looking unstoppable at times over the first half, but he was one of America’s best players in their Ryder Cup victory. Snedeker scored a perfect 3-0-0 record, and his three points were second to Patrick Reed’s 3.5.

3.Many Elite Names in the Field

Whoever wins this year’s Farmers Insurance Open will have to beat a lot of great players on the way. Aside from Jordan Spieth, Justin Thomas, and a few European Tour greats, it seems like anyone who is anyone on the PGA Tour will be at Torrey Pines this week. Here are a few of the better ones:

Similar to Tiger Woods, Jason Day is trying to shake off rust and get back into form after an injury layoff. Day withdrew from the second round of the season-ending Tour Championship with back pain, which required surgery. This too, will be Day’s second tournament back, as he made his return earlier this month at the SBS Tournament of Champions, where he finished T12 in the 32-man field.

He never quite contended at Kapalua, but he was consistent, shooting three 70s and a 69. The world’s #1 ranked golfer, won three times in a 2016 season where he was easily the best putter on Tour. He finished in the top 10 of half his starts (10 of 20). He missed only one cut in 2016 which, ironically, was at the Farmers Insurance Open, where he was defending his 2015 title.

The world’s #2 ranked golfer, Dustin Johnson was the runaway choice for 2016 PGA Tour Golfer of the Year, winning three times; most notably at the U.S. Open, his first career major title. He also led the Tour in top 10s, with an incredible 15 in 22 events.

DJ’s form in the early 2016-17 season looks good too – he was T3 at Tiger’s Tournament in the Bahamas, and was T6 at the SBS Tournament of Champions. Last year at Torrey Pines, he was competitive through three rounds, but a final round 80 – easily his worst round of the season, dropped him into a tie for 18th.

A San Diego native, Mickelson is another crowd favorite; probably THE crowd favorite. He has three career victories at the Farmer’s Insurance Open, second only to Tiger Woods. Mickelson still has not won since the 2013 Open Championship, but is coming off a 2016 season where his highs were very high.

The 46-year-old had an all-time great major performance finishing second at last summer’s Open Championship, and had three runner up finishes. He was also on top of his game at the Ryder Cup, proving that he still has some great golf left in him.

Last week at the CareerBuilder, which he was a game-time decision, following two recent hernia surgeries, Mickelson was competitive early-on, starting out 68-66 before struggling on the weekend and finishing T21.

After one of the craziest tears in recent memory (fours wins and two runner-ups in six tournaments internationally), Hideki Matsuyama finally looked mortal at the Sony Open in Hawaii, finishing in a tie for 27th.

The 24-year-old has risen to #6 in the world and is currently second in the FedEx Cup standings, trailing only Justin Thomas. Like Jason Day, Matsuyama surprisingly missed the cut at last year’s event, although unlike Day, he also missed the cut the previous year.

Another member of the victorious American Ryder Cup team, 2016 PGA Championship winner Jimmy Walker has a great history in this event.

Koepka, the world’s 19th ranked golfer, is making his 2017 debut this week, although he has played three tournaments in the current season with a best finish of solo-second at the Shriners Hospitals for Children Open.

Another member of the American Ryder Cup team, Koepka did not win in 2016, but had seven top-10s, two runner-ups, and was T4 at the PGA Championship.

If Tiger Woods and Phil Mickelson seem to have a smaller crowd around them this year, it is probably because those fans are stalking ‘Beef’, possibly the most likeable player on Tour.

The Englishman spends most of his time on the European Tour, but acquired a 2017 PGA Tour card via the Web.com Finals. This will be his first PGA event since the WGC-HSBC Champions in late October. This will also be his first appearance at Torrey Pines.

Another one of the Tour’s elites in regards to popularity, Fowler, the 14th ranked golfer in the world, is looking for his first victory since the 2015 Players Championship. He had eight top 10s in 2016, including a high finish of second place at the Phoenix Waste Management Open, where he lost in a playoff to Hideki Matsuyama.

Fowler has not been competitive at this tournament the past three years, with two missed cuts and a T46.

Lowry, the 29-year-old from Ireland, has shown flashes of great talent on the PGA Tour, but has not been quite the same since blowing the 54-hole lead at the U.S. Open.

This will be his 2017 debut, and he will be especially motivated to get his season off to a promising start. He finished T13 last year and T7 in the 2015 Farmers Insurance Open.