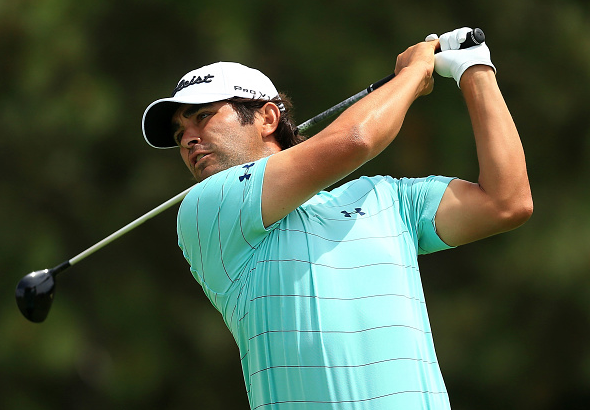 Martin Flores fired a bogey-free 66 on Friday at Glen Abbey, and leads the RBC Canadian Open after two rounds.

Flores’s second-consecutive 6-under round also included an eagle on the par 5 second hole for the second time in as many days.

“I was really pleased with my day. Starting on the back, sprinkled some birdies and able to capitalize on 16 and 18, two par 5s,” said Flores, who sits at 151 in the FedEx Cup standings.

Starting his round on the back-nine, Flores was 1-under through six holes, and then ripped off three birdies and one eagle over his next five holes to get to 6-under.

The 35-year-old Texan then cruised to par the rest of the way to finish at 12-under.

At 11-under, is a group consisting of first round co-leaders, Matt Every (68) and Brandon Hagy (68), alongside Gary Woodland, who posted a tournament-low 9-under 63.

Woodland’s round was one-stroke shy of the course record 62, and included a stretch of eight holes without a par.

“I just had everything clicking today. I’ve been playing well for a long time and just haven’t put all the aspects together,” said Woodland. “Today I drove it well. Obviously the ball-striking was good and I saw some putts go in, and that adds up to a pretty good number.”

Starting his round on Glen Abbey’s back nine, the 33-year-old Woodland birdied 13, bogeyed 14, and then ran off a string of six straight birdies to get to 7-under through 11 holes. Two more birdies over his final seven holes got Woodland to 9-under for the day.

A group of five players are tied for fifth at 10-under, headlined by first round co-leader Kevin Chappell (69) and former Canadian Open winner Vijay Singh (68). Others in the group at T5, include Charley Hoffman (66), Ryan Ruffels (67), and Harold Varner III (65).

Defending champion Jhonattan Vegas leads a group of four at 9-under and tied for tenth.

World No. 1 Dustin Johnson shot 3-under 69 and leads a group of 14 players tied at 8-under, along with Englishman Ian Poulter (69) and first round co-leader Ollie Schniederjans (71).

“I’m hitting the ball good. I hit a lot of good putts that didn’t go in the hole. I still feel really good with the putter,” said Johnson. “I feel like I’m rolling it well. I had a bunch of lipouts today but the golf course played a little bit tougher with the wind. But yeah, I’m in a good position going into the weekend.”

Graham DeLaet and Mackenzie Hughes are also at 8-under, and the only Canadians who made the cut.

Bubba Watson, who started the day one shot off the lead, posted a 73 and now sits seven shots back.