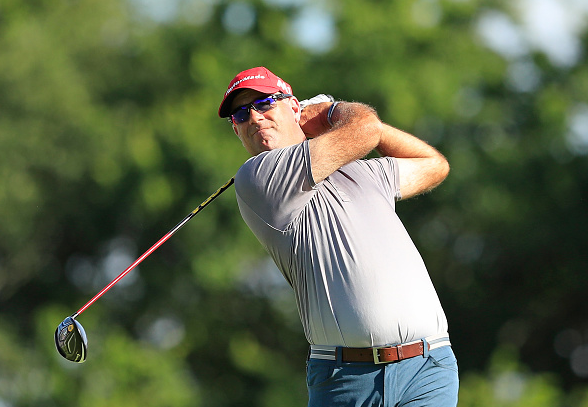 After the opening-round of the St. Jude Classic, there is a four-way tie atop of the leaderboard at TPC Southwind.

Scott Brown, Stewart Cink, Matt Every and Sebastian Munoz each shot 6-under 64s on Thursday to share the lead after 18 holes.

One shot back, tied for fifth, at 5-under 65, is the twosome of Matt Jones and Charl Schwartzel.

Chez Reavie and two-time U.S. Open champion Retief Goosen are tied for seventh after each posting 4-under 66s.

Every, who last won in 2014, and has struggled badly for the past two seasons, was happy with his round, but realizes there are 54 holes to go.

“I haven’t played real well in a couple years, and I’ve been out here for like seven or eight, so I kind of know the drill,” Every said. “Like one round is not that big a deal. It is nice to play well, but yeah, they don’t hand out trophies after the first round.”

Brown, who has two runner-ups in 2017 (Zurich Classic and Genesis Open), also had a strong finish with birdies on 16 and 17.

“I’ve been striking it nicely now for a few months and just the putter’s kind of been a little inconsistent,” Brown said. “Hot some days, cold some days. … If I can keep the putter rolling, should be kind of in the mix for the week.”

The 44-year-old Cink made the turn at 4-under and then went 2-under on the back-nine with four birdies and two bogeys.

Munoz, a 24-year-old from Colombia, posted a bogey-free round with six birdies, including back to back on Nos. 15-16.

Defending champion Daniel Berger opened with an even-par 70. The tournament favorite, World No. 9 Rickie Fowler, hit just six of 14 fairways en route to a 4-over 74. Aussie Adam Scott opened with a 1-over par 71.

“The key to my round today was the key to anyone’s round who plays well here and that is you’ve got to keep the ball in front of you. Meaning, you don’t have to hit every fairway, but you can’t really be off too much.”
–Stewart Cink