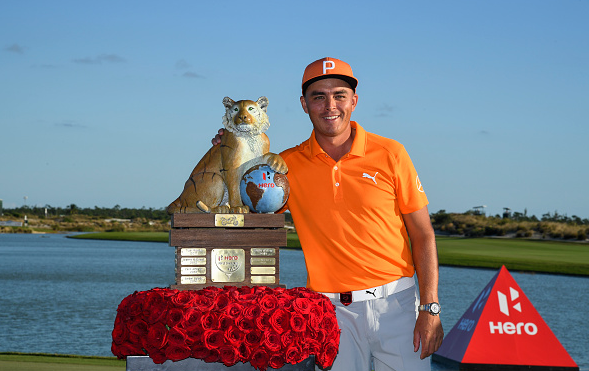 To the surprise of nobody, the Sunday spotlight at the Hero World Challenge in the Bahamas was hogged by an extremely popular player who has not won in a major over the past nine years. 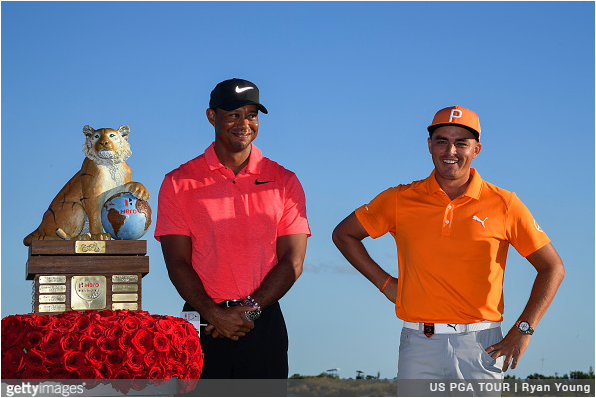 What is shocking, however, is the fact that that man was not Tiger Woods, the 41-year-old 14-time major champion who was making his first PGA Tour start in 11 months.

Instead, the final day of the limited-field unofficial event was stolen by Rickie Fowler.

Decked out in his typical ostentatious bright-orange Sunday wardrobe, the 28-year-old world No. 9 Fowler began his day with seven-consecutive birdies, taking amazingly little time to close a daunting seven-stroke 54-hole deficit, and shooting an 11-under-par 61 to win the Hero by four strokes over Charley Hoffman, who had been the leader by five with 18 holes to play.

Tiger, who was stories A, B, C, and D coming into the week, had an up-and-down final round 4-under 68 with a hot front nine and a pedestrian back nine that allowed him to finish in a tie for ninth place.

HOW FOWLER DID IT

After a difficult third round where high winds truncated red scores, especially in comparison to the first two rounds, the limited field found easier going on Sunday, although nobody was anywhere near as dialed in as Rickie Fowler. 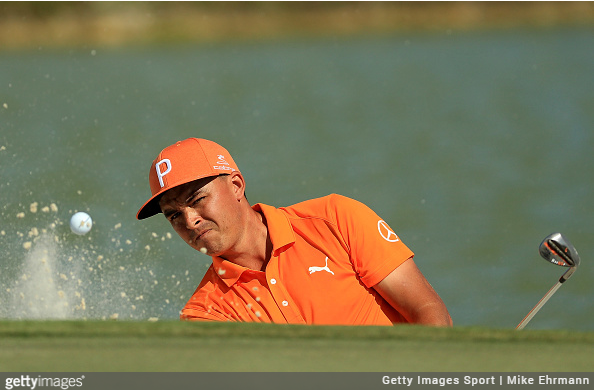 In what ended up being the lowest PGA Tour round in Fowler’s prolific career, a start of seven straight birdies allowed Fowler to vault to the front of the leaderboard before the turn.

Fowler’s blistering 8-under 28 on the front nine put him on 59-or-lower watch, but he was less unbelievable on the back nine, carding three birdies against six pars to shoot 61 and break the course record.

“Felt good to get out there and piece things together, and then to kind of back up the front nine after going out in 28 to continue to play some solid golf,” said Fowler. “It would have been nice to get a couple more to have a chance at the magic number.”

Hoffman’s front-nine difficulties, which included bogeys on holes 4 and 5, allowed Fowler to get well out front and cruise down the stretch for a decisive four-shot triumph.

WHAT IT MEANS FOR FOWLER

The Hero World Challenge might not be an official event, but it did award official world ranking points, which added another positive to Fowler’s impressive career resume. It is Fowler’s first victory of the new wrap-around season, and a one-up to the solo runner-up finish he posted at the recent OHL Classic at Mayakoba in Mexico. 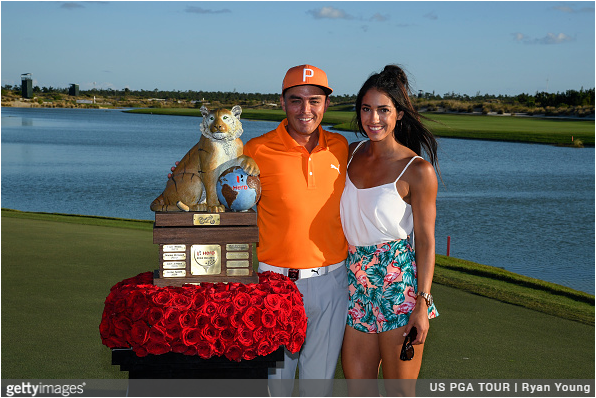 It is his second victory of the calendar-year, with his first coming at The Honda Classic back in February.

“Coming off of my best year statistically being that I put myself in a lot of positions to win, getting the win at Honda and coming off of the five-week break after the Presidents Cup and going to Mexico and finishing second and putting myself in contention there, and then to not necessarily be in contention going into Sunday but to make something happen, this is a nice way to end the golf season for me,” said Fowler.

The heat will continue to be on the talented Oklahoma State product, however, until he finally breaks through in a major championship.

Coming into the week, expectations were low for Tiger, given the poor results and frequent absences of his past three seasons, but after an eyebrow-raising 69-68 he found himself in contention at the tropical tournament he hosts annually. 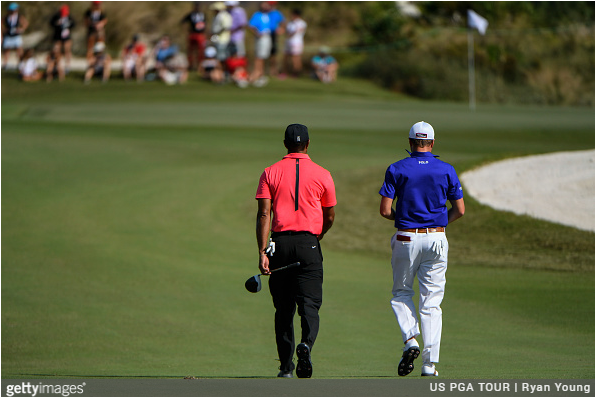 However, Tiger came back to earth on Saturday as a 4-over front nine led to a disappointing third-round 75, making the big question on Sunday, “Which Tiger is going to show up?”.

For at least nine holes, it was Thursday/Friday Tiger, as phenomenal driving was the catalyst for a bogey-free 4-under front nine that featured an eagle-2 on the par-4 7th, where he drove the green.

Unsurprisingly, given how long it had been since he last played competitively, Tiger ran on fumes down the stretch, dropping four strokes on the back nine, but still posted a 4-under 68 to finish T9.

“I’m excited. This is the way I’ve been playing at home and when I came out here and played, I was playing very similar to this. Not quite hitting it as far, but I had the adrenaline going and overall I’m very pleased,” said Woods.

Fowler carded enough red numbers for the entire field on Sunday, but he was far from the only player to excel on an idyllic Sunday. 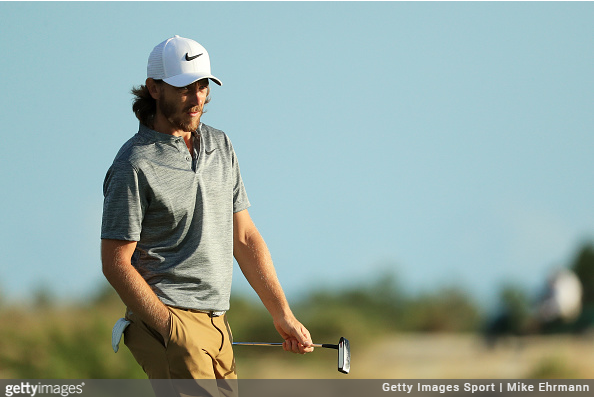 Tommy Fleetwood, the 2017 Race to Dubai Champion, had the second-best round of the day, although that 5-under 67 was still six strokes worse than Fowler. Fleetwood was bogey-free on the final day and finished in a tie for third place with Jordan Spieth.

Matching Tiger’s 68 was defending champion Hideki Matsuyama, who rebounded from a terrible Thursday front nine to finish a respectable T5 for the week.

Matsuyama’s first round began with a bang when he needed just two strokes to find the hole on the par-4 first hole. He also had three consecutive birdies before, like Tiger, he bogeyed the final two.

Also carding a final-day 68 was reigning PGA Tour Player of the Year Justin Thomas. Playing alongside Tiger, the lone blemish on Thomas’ day was a double-bogey on 17.

“I hit a lot of really, really good shots this week. I feel like if I would have played the easy holes well, I really could have had a chance,” said Thomas, who finished 7-under for the week and a solo-11th place.

Hoffman’s five-stroke lead to begin his final round was vulnerable given the strength of the field, but it was astonishing how fast the 40-year-old lost it. 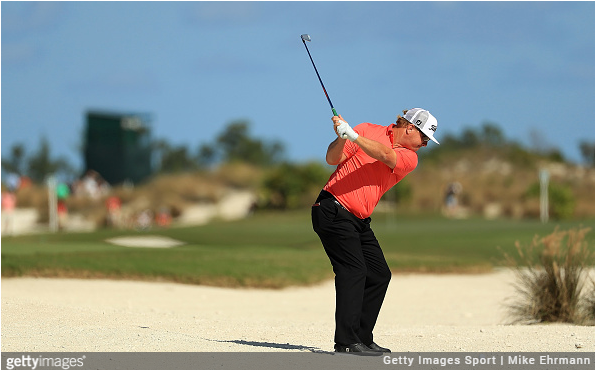 An opening birdie was a rare bright spot for Hoffman, who added just one more over his next 17 holes, parring the entire back nine for a disappointing round of even-par 72. He still finished runner-up, but it was not the Sunday Hoffman was looking for.

Matching Hoffman’s final-round 72 for the 16th best round in the 18-man field was world No. 1 Dustin Johnson, who stumbled out of the gates with a double-bogey 5 on the par-3 second hole.

Surprisingly, a round-one 68 was the only sub-par round on the week for the accomplished bomber, who finished T14.

The only worse Sunday came from Kevin Chappell, who had a disastrous triple bogey-double bogey finish to shoot a 4-over 76 and drop into a 14th place tie with DJ.

“I was just trying to stay as calm as possible, and try to stay in the moment, and make sure I was going through my process, and not getting ahead of myself. Seven (consecutive birdies) was the most I’ve made before, and I was really trying to get that eighth, and didn’t want to get two greedy trying to make it with good speed, and left it just a little short.

“I knew I needed to get off to a quick start to show Charley I was there and get up on the board a little. We took care of that, and kept it rolling from there.”
– Rickie Fowler, Hero World Challenge Champion