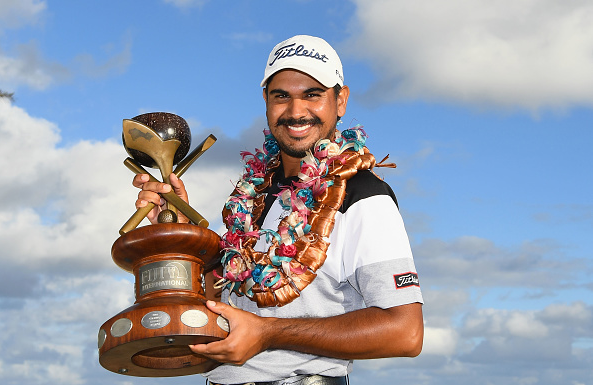 Gaganjeet Bhullar fired a 6-under 66 on Sunday to capture his maiden European Tour title at the 2018 Fiji International.

Bhullar entered Sunday’s finale holding a one-shot advantage at 8-under par, yet despite playing to 4-under par through 16 holes, the Indian found himself down one to Aussie Anthony Quayle, who’d set the early mark at 12-under par, following a sizzling final round of 63.

Bhullar, though, made a chip-in eagle on the par-5 17th to edge ahead and then held his nerve for a par on the 18th to clinch his first career Tour title.

“I’ve been playing really well,” said Bhullar, who had been teeing it up on the Asian Tour after losing his Euro membership in 2014. “It was just a matter of time and I’m glad it happened on this stage and really happy to be back on the European Tour.

“I played two full seasons back in 2013 and 2014 on the European Tour and then I had to come back to the Asian Tour because of my injury. So I think this victory is really emotional for me in terms of playing opportunity and getting back on the European soil.”

The 30-year old Bhullar finished his final day at Natadola Bay Golf Club with one bogey offset by five birdies, and one very important eagle, en route to a four-day score of 14-under par – one clear of Quayle, and two ahead of New Zealander Ben Campbell (66), and four-time major winner Ernie Els (65) of South Africa, who tied for third at 12-under par.

Australian Jarryd Felton carded a 69 to finish solo fifth at 10 under, one better than compatriots Andrew Dodt (71) and Jake McLeod (71), and Thai Poom Saksansin (68).

With the win, Bhullar earned $158,330 along with the same number of Race to Dubai points. The eight-time Asian Tour winner is now fully exempt on the European circuit through the end of the 2019 season.

It was certainly a battle out there today between you and Anthony. How did it feel, I guess, when you made that eagle on 17?

GAGANJEET BHULLAR: You know, honestly, it could have been anybody’s tournament. Ernie was right up there, Anthony played really, really well. 9 under on this golf course in
this condition, that is something really good. As I said, Ben Campbell was right up there.

I think it was just maybe golfing gods were on my side this week and my back nine was really, really strong. I played the last few months, I was struggling on my Sunday back nine. But I’m really proud of myself that this was actually to prove it to myself and I’m glad I did it. Really, really good to be back.

Jhonattan Vegas Leads The Honda Classic After Day One