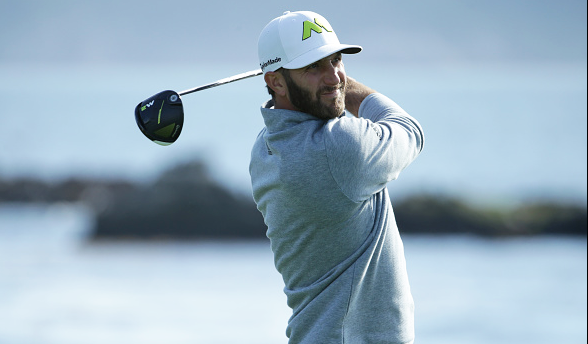 In 2016, the AT&T Pebble Beach Pro-Am presented the PGA TOUR field with warm weather, brilliant sunlight, and the steady ocean breeze one would expect along the sprawling rocky shores of the Monterey Peninsula. Thriving in those conditions was TaylorMade’s Vaughn Taylor who shot 65 in the final round to secure his first PGA TOUR win in over 10 years.

This year, however, Pebble Beach is revealing a different side of its two-faced nature, as high winds and sideways rain are projected to be a lasting presence throughout the event.

During Tuesday’s practice round—near the peak of the downpour—the range was completely empty with the exception of one prominent PGA TOUR athlete. Dustin Johnson had spent enough time waiting around inside and chose to brave the wet conditions so he could work on his game—most importantly on the latest club he added to his bag: his all-new 2017 M2 driver.

As a player who dominated 2016 with M1, picking up a U.S. Open and PGA TOUR Player of the Year along the way, making a driver change took some time. With a week off during the Waste Management Phoenix Open, DJ took the opportunity to put the new M2 driver to the test. On the range and on the course, DJ immediately noticed increased accuracy and a tighter dispersion with the redesigned 2017 model. His typical miss (as infrequent as it may be) tends to be a bit off the toe—and as a result of the new M2’s increased forgiveness, he experienced a much straighter ball flight, even when he missed the center of the face.

What’s even more staggering is that he noticed his toe-miss was going up to 10 yards further than the 2016 M2 driver’s toe hits. To test this, he put the two drivers head-to-head using Trackman to gather the exact performance data. After hitting a series of shots with each driver head, Dustin was able to verify that he was gaining an average of 2 mph of additional ball speed—likely the result of added ball speed preservation (forgiveness) across the entire face.

After a week of testing, his decision to put the all-new 2017 M2 driver in play was simple. And for DJ, his commentary on the improved performance was simple.

“It’s just the easiest driver to hit that we have ever made,” said DJ.

In competition, his impact of his equipment change was immediate. Ahead of Thursday’s Round 1 weather suspension, Dustin had hit 91% of his fairways and averaged 313 yards off the tee, even in the wet and windy conditions.

In addition Dustin Johnson, several other celebrities, amateurs, and Tour players had new M products in their bags to improve their ability to navigate the courses of Pebble Beach.

San Francisco Giants pitcher Matt Cain dialed in his own 2017 M1 driver. After testing out a few shaft options and adjusting the sliding weights of M1’s T-Track, Matt was ripping drives out there with many of the Tour’s long hitters.

Musician Kenny G went with the all-new 2017 M1 driver as well. Giving DJ a serious run for “most dedicated golfer on the range,” Kenny stuck it out through hours of frigid rain, meticulously working on his game. As a longtime player of TaylorMade equipment, he was adamant that the new M1 has a hotter trajectory and more penetrating ball flight than any driver he’s ever hit.