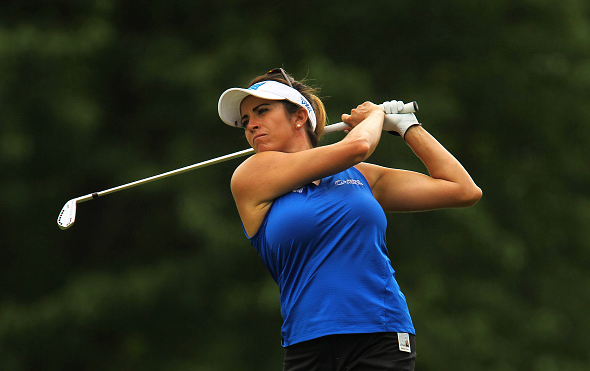 Gerina Piller posted a 3-under par 68 on Friday at Highland Meadows Golf Club to take a one-shot lead into the weekend at the Marathon Classic presented by Owens Corning and O-I.

The 32-year old Piller finished her second round in Ohio with four birdies, including three straight in the middle of her closing nine.

Thompson, who is ranked No. 3 in the world, fired a 6-under-par 65 on Friday, which included eight birdies.

Despite a solid LPGA Tour career, which has included 34 top 10s, and even a spot on the 2016 U.S. Olympic team, Piller is still in search of her maiden tour win. In fact, this is the first time she’s held a 36-hole lead.

“It’s only Friday, so I wouldn’t put the cart before the horse, but to get that first win I think would be really special, no matter where it is,” Piller said. “I’m just going to try to focus on the process, and the result will take care of itself.”

Aditi Ashok (68) is alone in sixth at 9-under, one stroke ahead of a group of four at 8-under, headlined by U.S. Women’s Open winner Sung Hyun Park (70) and Brittany Lincicome (67).

Defending champion Lydia Ko is at 1-under, following a second-round 68.

"I don't think I've ever held the lead after the 1st round." @Gerinapiller is the current leader after round 2 of the @MarathonLPGA pic.twitter.com/iWS717CQt7

“I felt like I played great. I missed some birdie opportunities, but I made some longer putts today. Ball striking feels great. Putting feels great. It was just a matter of staying patient and just letting the results come.”
–Gerina Piller, 36-hole leader, Marathon Classic