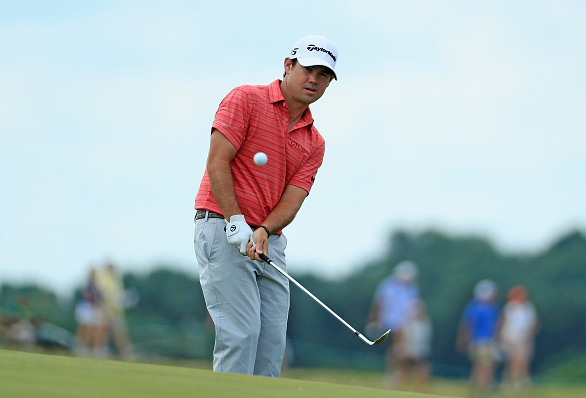 Numbers like these are not supposed to exist at a U.S. Open.

For a tournament that prides itself in being the most difficult in all of golf, an exceptional number of players seem to have figured it out.

Through 54 holes, 42 players are under-par. Of the top 5 all-time lowest 54 scores in the 117 years of U.S. Open championships, this week’s field at Erin Hills owns numbers 2-5.

Coming into the week, only three players have finished the U.S Open double-digits under-par in its 122-year history, but through three rounds this year, five players are already 10-under-par or better.

Through three rounds, five different players have shot a round of seven-under or better, more than double the record for any one four-round U.S. Open.

Somebody even shot a 9-under 63 today, the new all-time low mark for the tournament that has been played annually since 1895.

But don’t take all that as complaining. This U.S. Open might have lower scores than fans are used to, but this particular tournament has still been absolutely riveting.

Going into the final round, there are more than a dozen players who still have legitimate title hopes. No player in the top 16 has ever won a major, meaning there is the potential for a LOT of Sunday movement.

It is shaping up to be an all-time classic.

This tournament has not been just numbers, however. Players are attached to those numbers, and through 54 holes, the best of those players has been the surprising and diminutive Brian Harman, whose accuracy and precision have allowed him to take the lead at -12.

One back of Harman is Justin Thomas, the aforementioned player who exploded up the leaderboard with an unfathomable 9-under 63, along with Englishman Tommy Fleetwood and big-hitting American Brooks Koepka.

Whether the wind picks up and the U.S. Open finally starts to look like the U.S. Open, or current conditions persist and the entire recordbook is obliterated, this truly does look like anyone’s tournament.

To understand just how incredible @JustinThomas34's 63 is, let's put it in a little perspective. pic.twitter.com/zI7XyunEJ9

A record-setting third round that moved @JustinThomas34 to one off the #USOpen lead earned him the @Lexus Top Performance of the Day. pic.twitter.com/thfxy1v1Dk

How Harman Did It

Brian Harman is in the midst of a tremendous season, even winning last month at the Wells Fargo Championship, but his 54-hole lead is still a surprise.

While he hits further than most think a player his size would, he is nowhere near the bomber that many thought was necessary to capture a course of this length.

The 30-year-old is also in completely new territory: his best career finish in a major is T26, and he has never even made the cut in a U.S. Open before this week.

Like in the first two rounds, where he shot 67-70, Harman is in the lead because he has been scary accurate.

The Georgia alum had just one bogey on Saturday, which somehow represents 50% of his bogeys for the entire week. He hit 12 of 14 fairways, 14 of 18 greens, and putted tremendously.

Harman is doing an excellent job of playing to his strengths, while managing his defencisies. If he can keep it up for just 18 more holes, he could easily go down as one of the most unlikeliest U.S. Open winners.

The man everyone is talking about after round three is Justin Thomas.

Not enough can be said about just how phenomenal he was in breaking Johnny Miller’s 44-year U.S. Open record.

It was the lowest round ever in relation to par, and just the fifth 63 in tournament history. Thomas had nine birdies and finished with an emphatic eagle on No. 18, covering over 667 yards over his first two shots, with his approach, a three-wood off the deck landing just 8 feet from the hole.

The 24-year-old budding superstar had 1.7 or better in every strokes gained statistic, which is basically unheard of.

Patrick Reed had the next best round of the day, breaking out his Ryder Cup pants and putting a show reminiscent of what we saw last fall at Hazeltine, with a 7-under 65.

Reed propelled 26 spots up the leaderboard to T7, matching Louis Oosthuizen for the high riser of the day.

Matching Harman’s 5-under 67 was Russell Henley who quietly soared into contention with his bogey-free round, and is just four strokes off the lead.

As great as the field was as a whole, there were a few players who actually looked like they were playing a U.S. Open.

It was a different story in round three for Casey, however. He was unable to bounce back from a third hole triple-bogey, carding just two birdies and posting a three-over 75.

The 2015 U.S. Open Champion, Jordan Spieth, was even worse. He needed a big day to get into contention, a round something like his close friend Thomas posted, but he did not come close.

Spieth struggled badly, especially with his putter, on his way to a 4-over 76. He is now in a tie for 59th, 16 strokes behind Harman.

The big dropper of the day was William McGirt. Contending on the first two days of his second straight major, McGirt is nowhere near the championship picture now, after shooting a 7-over 79.

McGirt put himself in terrible positions all day, and as a result, he stumbled 40 spots down the leaderboard, going from -3 to +4 for the tournament.

It looks like the Sergio Slam (that nobody was talking about) is not going to happen.

Sergio Garcia, this year’s Masters Champion, was the only player under par through 36 holes at Erin Hills and last year at Oakmont, but was unable to get much going on Saturday, shooting a disappointing 1-under 71.

While a 1-under round is never considered poor at a U.S. Open, he needed something much better to contend for the lead.

At -4 for the tournament, and eight back of Harman, Sergio will need a series of very unlikely results to reach 2-for-2 on the major year. Sergio did birdie three of his last four holes, but it was probably too little, too late.

“Yeah, 12 under, I’d have about a 10-shot lead in most Opens.”
Brian Harman, 54-hole leader, commenting on all the low rounds

“It means I’m a part of history. It means I have a lot better chance to win the tournament than I did when the day started. It’s all pretty self-explanatory, I guess, in terms of what it means.”
–Justin Thomas, on his record-setting 63