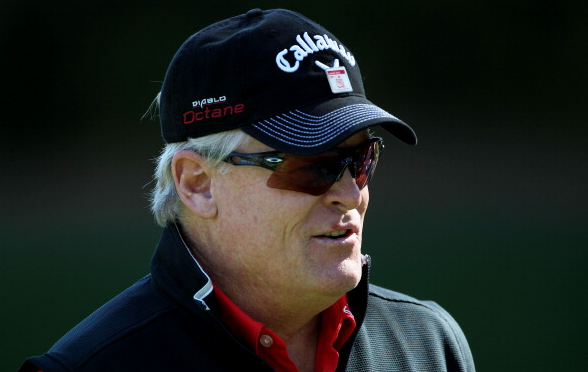 Johnny Miller, the acerbic golf analyst for NBC, was most famous for shooting the best score to par in a U.S. Open, an 8-under 63 at Oakmont in 1973.

It has always been considered one of the greatest feats in major golf championship history.

Today, that record was broken by Justin Thomas who fired a 9-under 63 in the third round at Erin Hills.

Miller, according to the Golf Channel, happened to be at Erin Hills, as part of a sponsor gig, to witness Thomas’s record-setting round.

The 70-year-old Miller was complimentary to Thomas, about his performance, but said it doesn’t really compare to his round – given the course (Oakmont), the competition (Nicklaus, Weiskopf) and the moment (final round to win by one).

He said his 63 will stand the test of time, even if it no longer appears in the record books.

“Taking nothing away from 9 under par – 9 under is incredible with U.S. Open pressure,” Miller told Golf Channel by phone. “But it isn’t a U.S. Open course that I’m familiar with the way it was set up.”

The U.S. Open has always been defined by narrow fairways, heavy rough and lighting fast greens. It is considered the toughest test in golf.

While the Wisconsin golf course is plenty long (7,800-plus yards), its fairways are about as wide as Lambeau Field, sideline to sideline (50-plus yards).

For example, in its previous 116 editions, the USGA has set up its courses so difficult that only three winning players, over 72 holes, have reached double digits under-par.

After just 54 holes at Erin Hills, there are 5 players with scores of 10-under or better.

Miller said Erin Hills looks to be playing like the Milwaukee Open, with the leader at 12-under and 42 players under par.

“It looks like a PGA Tour event course setup,” he said. “I’m not sure where the days of the 24- to 29-yard-wide fairways that we played every time went. It’s interesting to see where the USGA has gone with the U.S. Open, being a little more friendly than in years’ past.”

Miller said a multitude of factors have turned the course into a “perfect storm for a good score.”

With its wide open links layout, and rain-softened greens, players have bombed away with no fear of punishment.

“The course wasn’t designed to be soft, and if it was going to be soft, it should have been 26- or 27-yard-wide fairways,” Miller said. “That’s what made it easy. The guys weren’t afraid to bomb it.

Thomas, at 11-under, one shot back of Harman, admitted it’s been a “different” U.S. Open experience.

“It’s what the USGA and U.S. Open is known for is making you hate yourself and hate golf and just really struggle out there,” he said. “But it’s different being like this. Just being in a U.S. Open and seeing and hearing so many birdies. Usually those roars are for pars, but it’s fun.”

Needing an eagle on 18 to knock Miller from the record books, Thomas blasted a 3 wood from 299 yards, high cutting it, and softly landing it on the front portion for a slow-roll to 8 feet.

“I knew he could get it there,” said Jonathan Randolph, who was paired with Thomas. “But I didn’t know he could hit it that high and that soft.”

Thomas of course would go on to drain his putt, dead center, and make history.