When golf first came to The Broadmoor in 1918, the Donald Ross design was the highest golf course in the United States at some 6,400 feet above sea level. Ross himself declared the Colorado Springs layout his best work – high praise considering his previous project had been Pinehurst No.2.

In 1948, the resort brought in Robert Trent Jones Sr. to design nine additional holes, which joined with nine of Ross’ originals to comprise the East course. Sixteen years later, Jones returned to carve out nine more holes to mix with the remaining Ross holes as the West course.

This week’s U.S. Senior Open will be the seventh USGA championship at The Broadmoor, including Jack Nicklaus winning the 1959 U.S. Amateur and Annika Sorenstam’s first major title at the 1995 U.S. Women’s Open. 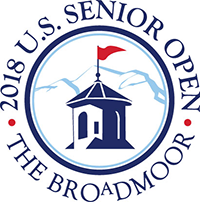 The hotel’s name and logo is always officially presented as all uppercase with the ‘A’ being smaller and raised higher than the other letters: BROADMOOR. The reasoning behind this is surrounded by legend.

One story is that hotel owner Spencer Penrose had a friendly rivalry with the Antlers Hotel, and for that reason, Penrose required the ‘A’ in “Broadmoor” to always be smaller than the other letters.

Another story about the small “A” suggested that Penrose had need to be a guest at the Antlers hotel. On a trip to visit a gold mine, he ended up working alongside the miners. After a full day in the mine, Penrose returned to the Antlers but was denied entrance because he was so dirty.

Angry, Penrose vowed that his hotel would never refuse a room based on appearance, and that as a constant reminder of the small minded act, the “A” in the Broadmoor name was diminished in size.

The original copyright documents, filed December 15, 1918, stored in the hotel archive, however, show that the alteration was necessary to obtain exclusive copyright due to other uses of the word Broadmoor in the nearby area since the 1880s.