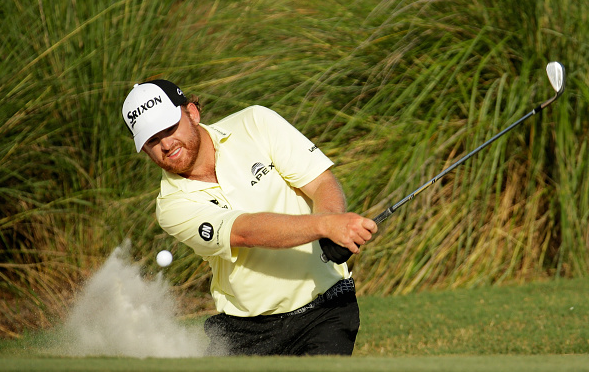 J.B. Holmes and Kyle Stanley are tied for the lead at 9-under par after three rounds of play of the Players Championship at TPC Sawgrass.

Just one back is a 36-hole co-leader Louis Oosthuizen at 8-under, while 21-year-old South Korean, Si Woo Kim, is two shots back at 7-under.

Holmes entered Saturday’s third round just a shot behind co-leaders Stanley and Oosthuizen, but on a day when none of the top leaders made any kind of a move, the 35-year-old’s 2-under 70 was just enough to get him a share of the 54-hole lead.

A fine shot, and a tip of the cap from @JBHolmesGolf.#QuickHits pic.twitter.com/zxIPZS97UW

Stanley, the 36-hole co-leader, started his day with 3 bogeys (and a birdie) over his first four holes to drop two shots. But after that, the 29-year-old’s card was clean with two birdies.

“I usually can make a bunch of birdies, so if I can just narrow it down to one bogey, then I’m usually in good shape.”
J.B. Holmes, 54-hole co-leader.

“You just kind of have to remind yourself that even though you’re a little bit over par, on the leaderboard I was still in a pretty good spot.”
Kyle Stanley, 54-hole co-leader.

“No lead can be big enough… It’s a great three finishing holes, and you need to be on your game. You need to hit the ball well and … try not to do anything heroic when you have the lead.”
Louis Oosthuizen, one shot back after 54 holes.

Bank Shot of the Day

Si Woo Kim banks his tee shot off a palm tree on the 12th hole at TPC Sawgrass.

The assist goes to the ?. pic.twitter.com/i8mGpTRwbe

Bunker Shot of the Day

Henrik Stenson holes out from the sand on the 14th hole.

How tough is the 14th hole playing?

There's only been two birdies on the hole today, and this is one of them.#QuickHits pic.twitter.com/8q4NhTtBtn

Sergio Garcia, just off the green on 16, drains a putt for eagle.