Beau Hossler fired a 5-under-par 66 to move into a share of the lead with J.J. Spaun after three rounds at the Shriners Hospitals For Children Open. 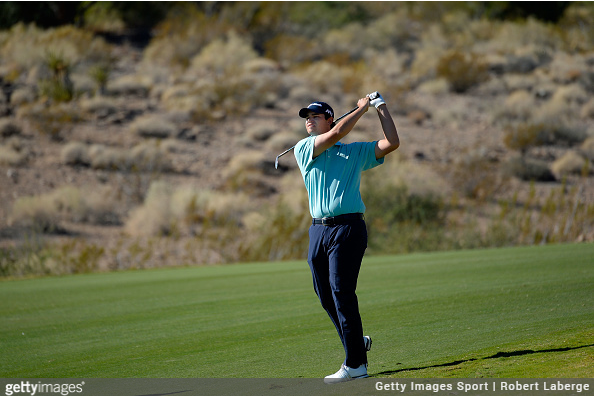 The 22-year old Hossler, who got in just before the winds reached their peak of 30-40 mph, posted a bogey-free round, punctuated by a birdie on No. 18 to reach 9 under.

“To get out of there bogey-free is kind of a miracle, to be honest. I hit some nice saves with my short hand and my putter,” said Hossler, who finished T10 in Mississippi last week. “Like I said, if I can go tomorrow and keep the putter rolling, I feel good.”

Co-leader Spaun, playing in the final group with Kelly Kraft (79) and Robert Garrigus (77), got caught in the heaviest winds down the stretch, but survived to finish par-bogey-par over the final three holes, highlighted by a clutch par-saving 10-foot putt on 18.

“But, yeah, I kind of kept things together. Those last five holes were pretty brutal. So to not really give too many shots back on those holes, yeah, it’s not so bad as it looks,” said Spaun, 27, a San Diego State alum.

Tony Finau, one of the tournament favorites, offset a bogey on 12 with a pair of birdies on 13 and 15 to sign for a 2-under 69. The 28-year old is alone in third, and just three shots back at 6 under.

“Just keeping myself in this situation, and how I react. You learn a lot about yourself. I look forward to the challenge tomorrow, and I’m happy to be in contention,” said Finau, who hit 17 of 18 greens on Saturday.

Patrick Cantlay (70) played his first 17 holes to 3 under, and bogey free, but the young star got caught in the brutal winds on the final two holes, and paid for it with a double on 18.

The 25-year old Californian is tied for fourth at 5 under.

“Yeah, it’s going to be tough. Anytime you’re playing on the PGA Tour or even the Web.com tour, it’s so tough to win. These guys are so good, and the golf course, particularly on the PGA Tour, are very difficult. There is trouble all over. I think it’s so important to have a good game plan and stick it out.”
–Beau Hossler, Co-leader after 54 holes