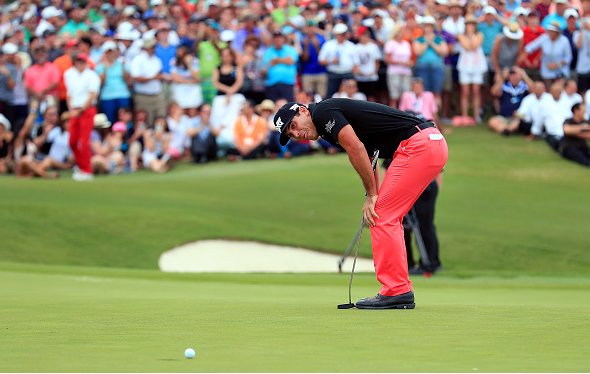 Longer story: Horschel began the final round at -11, one shot behind James Hahn.

Horschel then fell two strokes behind Hahn after bogeys on 12 and 13, the latter being a missed 3 footer.

Then it happened. The “kick in the butt.”

Horschel nailed a 59-foot birdie putt on 14 to set his round in the right direction. It was the longest made-putt of his PGA Tour career, and it could not have come at a better time.

“I’m hoping to get it somewhere close so I don’t have to make another 4-footer for par and I hit it and it was on a good line. I didn’t think it was going to get there,” said Horschel describing his long birdie putt on 14. “It kept rolling and rolling and rolling and it dropped and that was huge because, you know, tied me back up with Jason and James and it gave me the little kick in the butt to say hey, let’s not give up on this, keep grinding it out and see what happens.”

The back 9 on Sunday rarely disappoints.

Hahn faded somewhat down the stretch with bogeys on 12, 13, and 14 (although he nearly forced his way into the playoff when his second shot on the par-4 18th lipped out), and after Horschel and Day both parred the 72nd hole, the Byron Nelson went into a playoff for the second consecutive year.

On the first playoff hole, Day and Horschel both reached the green in two, and both missed long birdie putts.

Horschel tapped in his Titleist for par, and was getting ready to head back to the tee for a second playoff hole, when something unexpected happened: Day missed his three-foot par putt, handing the championship to the 30-year-old former Florida Gator.

The victory marked Horschel’s first career playoff win. (Back in the fall, Horschel was the first player eliminated in a six-man playoff at The RSM Classic, eventually won by Mackenzie Hughes.)

In 16 starts this season, Horschel now has five top-25 and three top-10 finishes, including Sunday’s victory.