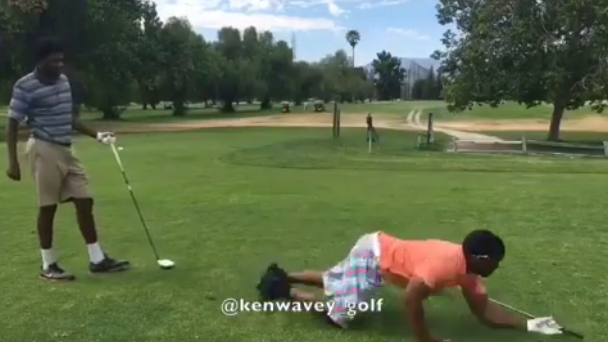 Everyone knows LeBron James as one of the greatest players in NBA history. The Cleveland Cavaliers superstar has also earned a rep as a world-class flopper and crybaby.

This quick clip provides a little context for those who aren’t b-ball fans. (H/T NESN)

LeBron with the flop of the century pic.twitter.com/iWVaU7gDvO

There are all kinds of clips and memes out there having fun at LeBron’s expense. But youtube comedian Kenwavey Golf takes it to another level, satirizing LeBron’s flopping and showboating on the golf course.

Still trying to pick my fav: The flop when he’s hit with a tee, or the Bron Bron-like celebration after a gimmee putt.

Lebron James as a golfer… ???@kenwavey_golf nailed this one.