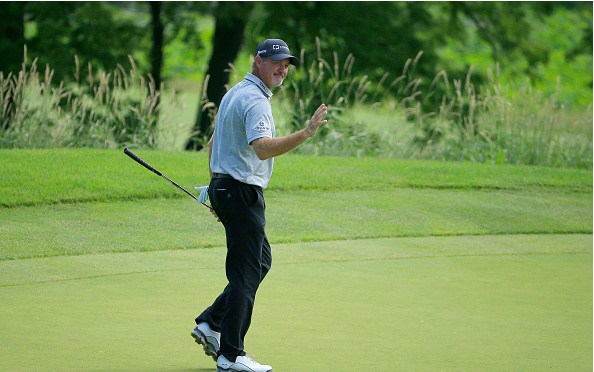 Jerry Kelly shot a final-round 3-under 68 en route to a 14-under total and a one-shot victory at the Pacific Links Bear Mountain Championship. 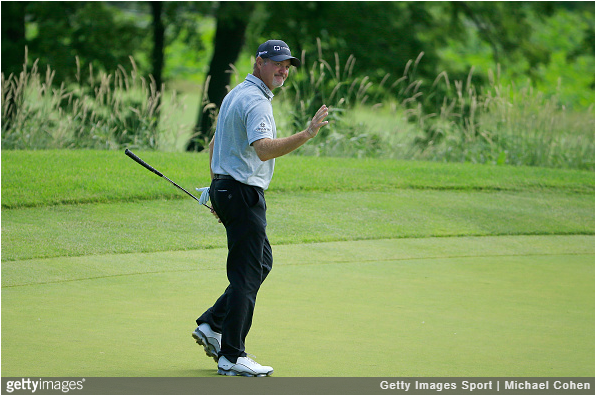 Trailing by one at the start of the day and playing in the final group, Kelly took his first lead after he parred the par-3 4th hole. He quickly relinquished it with a bogey on No. 5, and didn’t lead again until Lee Janzen, who was in the penultimate group, made a double bogey on the par-4 17th.

After grabbing the lead, Kelly parred his final two holes to finish one ahead of Janzen. Afterwards, the 50-year old rookie credited his news irons for an improvement in play.

“The funny thing is I switched irons and won in Seattle and played well the week after in Calgary, and it’s just continued on here,” said Kelly, who hit 15 of 18 greens on Sunday. “Some of those changes, things click and next thing you know you’re playing with confidence and get some wins.”

Janzen, following three straight birdies on Nos. 12, 13, and 14, took a one-shot lead at 16 under. But the two-time U.S. Open winner gave all three strokes back with a bogey on 15 and the aforementioned double on 17. A par on the 18th gave Janzen a 13-under total, good for a solo second finish.

“On the tour, I took 71st or 72nd last year, I’m not sure, so I was fully exempt all this year. I could have played all I wanted to. I’ve still got a top-50 exemption sitting in my pocket and I can be fully exempt any year that I want to going forward. I don’t know if I’ll use it. As long as the Sony people let me in that tournament and possibly Harbour Town and I go back to Hartford where I went to college and I play a team event with Stricker, I think those four events will be just fine with me. I’m very happy to call this my home tour.”