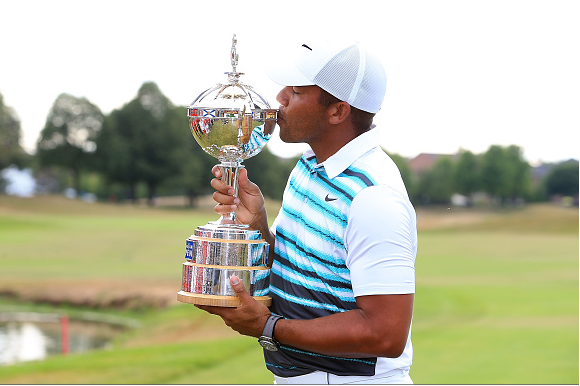 With the best playing conditions of the week at Glen Abbey Golf Course, there were signs early today that deep red scores were possible. Then when Geoff Ogilvy, George Coetzee, and Brian Harman all posted Stenson-esque 63s, and the message to those in contention was clear: go low.

Nobody took that message more to heart than Venezuela’s Jhonattan Vegas, who shot an 8-under par 64 to post at -12, and then waited while those in the later groups would butcher their chances to catch him.

It was the second career win for Vegas, the man who made U.S. headlines last week, when he shot a second-round 60 at the Barbasol Championship. His first win was at the 2011 Bob Hope Classic, in only his second career event.

Vegas has a reputation for being a streaky player and he was fortunate to have his inside faucet turned sharply to hot all day. He came out guns ablaze (which is typically difficult to do in Canada with the strict firearms laws), carding birdies on five straight holes, #2-6.

He played 9 through 15 at even par before finishing his round birdie-birdie-birdie. He went into the last hole thinking he would need an eagle, but a birdie ended up being enough.

Even after the tremendous finish, Vegas looked like a long-shot to win. Glen Abbey has three par-5s in its last six holes, and there were many in contention. His biggest threat at that point figured to be American Steve Wheatcroft who stood on the 16th tee tied with Vegas, with two par-5s ahead of him. Wheatcroft went on to par 16, bogey 17, and then airmailed his third shot on 18, out of a green side bunker and into the water. He would finish with a bogey.

Numerous other players had a shot to reach Vegas, but one by one, they crumbled to late round pressure.

What It Means For Vegas

With the win, Vegas receives an invite to next week’s PGA Championship at Baltusrol. It also means a two-year Tour exemption for a man who has struggled to keep his card the past few years. Vegas also soars to 24th in the FedEx Cup Standings, putting himself in great position to go deep in the playoffs.

In the quest to become the first Canadian winner of the national open in 62 years, low Canadian honors went to 21-year-old amateur Jared du Toit, whose final round was a somewhat disappointing 1-under 71, but for his first PGA tournament, it was a phenomenal showing. He went under par all four rounds. It is even better when you consider that he spent part of last night in the hospital with severe bronchitis. Among Canadians, Adam Hadwin shot a final-round 71 to finish at -1. He was the only other canuck under par.

In addition to the 63s by the aforementioned trio of Geoff Ogilvy, George Coetzee, and Brian Harman, an early 66s were posted by Danny Lee and Camilo Villegas. First and second round co-leader Luke List rebounded from a disastrous Saturday with a 5-under 67.

Chad Campbell started the day closer to the lead than Vegas, but never got anything going today. He shot a one-over par 73 to finish T26 (-5) for the week. Garrett Rank, amateur Canadian golfer and professional NHL referee posted a second consecutive four-over 76. He finished T77 (+8) for the week.

“It’s incredible! There are a ton of emotions going through my head right now. It’s just a fun feeling. This is what you train for, this is what you spend every moment at home for, and I’m just so excited!” ~ RBC Canadian Open Champion Jhonattan Vegas

Jhonattan Vegas Leads The Honda Classic After Day One