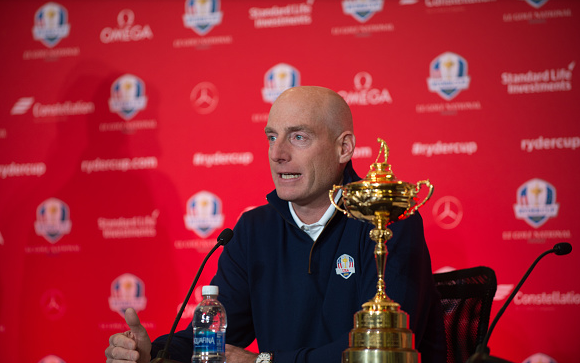 Jim Furyk, like many his age (47), had never been on Twitter before today. And who can blame him!?

Twitter is known as a swampland for trolls, and really only useful for media and marketers.

But with his ascendancy to the captaincy of the 2018 U.S. Ryder Cup team, Furyk signed up (or someone on the Ryder Cup team did), and posted his very first tweet – as part of his marketing duties.

Incredibly honored to be the 2018 @RyderCupUSA Captain. Really looking forward to the next two years and the journey to Paris! #GoUSA pic.twitter.com/khlVZzxpA5

So who are the 23 that Furyk has followed? Well, seven are golf organizations (e.g. PGA, PGA Tour, Ryder Cup), so only 16 are real people.

Furyk followed ALL the players and captains from the winning 2016 team who are on Twitter EXCEPT J.B. Holmes – who was the only non-follow from the historic team.

Furyk also followed Tomas Bjorn, the European captain, and Tom Watson – a potential vice-captain, as well as his wife, Tabitha, who is sure to be by his side.