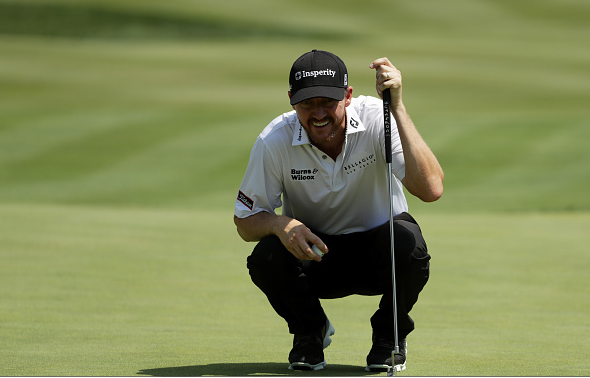 From 2014-2015 Jimmy Walker won five events on tour. It was an impressive breakthrough for a guy who had defined “journeyman” up to that point. He has never won, or even seriously contended at a major, but after a round of five-under 65, Walker finds himself on top of the leaderboard at the PGA Championship at Baltusrol after one round.

He holds a one-stroke lead over Martin Kaymer, Ross Fisher, and Emiliano Grillo.

As well as Walker played today, the big story of round one was the number of elite players who didn’t play well.

A surprising 10 of the world’s top 17 ranked players played their first round over par, with several of those players being well over par. Among those who played exceptionally poor golf were Rory McIlroy (+4), Matt Kuchar (+4), and U.S. Open champion Dustin Johnson (+7) Among the elites, only Henrik Stenson (-3), Jason Day (-2), and Rickie Fowler (-2) are close to the lead.

Jimmy Walker was not special off the tees, averaging just 273.6 yards while hitting 7 of 14 fairways. Out of 156 players, that was 148th in distance and 67th in accuracy. He was also 85th in GIR. Walker’s short game, however, was hot and he limited mistakes, with only one bogey on the round. He went on a mid-round tear with birdies on 5 of 7 holes at one point.

Eyes on Stenson and Phil

Just two weeks removed from The Open Championship, where Henrik Stenson and Phil Mickelson absolutely obliterated the rest of the field, a lot of people were curious how the twosome would respond. Stenson was able to keep the momentum going, shooting three-under 67, despite being in an afternoon wave that played considerable worse than the morning wave. Only Martin Kaymer had a better score from the afternoon.

Mickelson, playing in the morning wave, struggled early, going +4 over his first 11 holes before righting the ship with three birdies down the stretch. Phil finished at one-over 71.

Vaughn Taylor (-2), Rich Beem (-1) – Taylor won at Pebble Beach earlier this year, but his season has been a disaster since. In the 15 events since that victory, Taylor has missed nine cuts and has not finished better than T35. He hit 11 of 14 fairways, and birdied four of the last six holes today to shoot a two-under 68.

Beem, the 2002 winner, barely plays competitively anymore. In the past three years, he has entered just seven tournaments, missing the cut in them all. A birdie-birdie start for Beem were the catalyst to a one-under 69.

Dustin Johnson (+7), Rory McIlroy (+4) – As hot as DJ has been as of late, finishing in the top 10 in 8 of his past 10 events, his round today was mind-bogglingly bad. He had twice as many double-bogeys (2) as he had birdies (1). That one birdie was still one more than Rory McIlroy had, as Rory’s dreadful day on the greens may have sunk his last chance at a major this year.

Crazy Stat of the Day

Rory McIlroy and Dustin Johnson rank first and second on tour in birdie average. The two combined for only one birdie today.