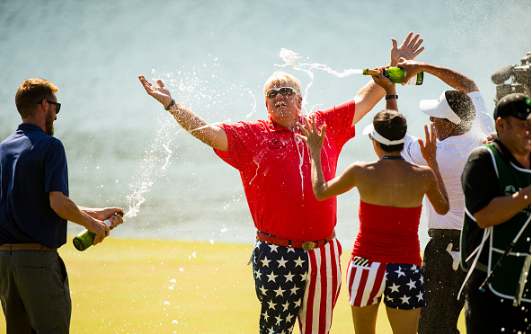 John Daly was running out of gas down the stretch on Sunday at The Woodlands, but the two-time major champion held on to capture the 2017 Insperity Invitational. It was Daly’s first Tour title since the 2004 Buick Invitational.

Despite bogeying the final three holes, the 51-year-old Daly finished with a 3-under-par for the day, and 14-under for the tournament.

Kenny Perry and Tommy Armour III finished one shot back, and tied for second at 13-under.

After he tapped in for bogey, Daly pumped his fist, did some hugging, and then was sprayed with champagne by friends.

A big win for Big John.@PGA_JohnDaly wins the @InsperityInvtnl for his first victory on PGA TOUR Champions. ? pic.twitter.com/bxTbhQQuTn

“It wasn’t pretty at the end. But I got it done and that’s all that matters.”
-John Daly, 2017 Insperity Invitational Champion