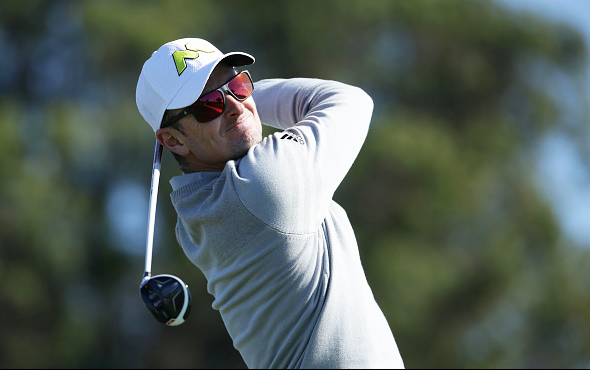 With all the unbelievably low scores being posted lately on the PGA Tour, it would seem surprising to see a player with the solo round one lead who had three bogeys and missed over half his fairways.

However, this is at Torrey Pines, one of the most notoriously difficult courses on Tour, and that’s exactly what we have after 18-holes in La Jolla, as Olympic Gold Medalist, and former U.S. Open Champion, Justin Rose leads after a seven-under 65 in round one of the Farmers Insurance Open.

Rose leads by one stroke over the newest member of the 59 club, Adam Hadwin, who posted the magic number last week in La Quinta. A large amount of the buzz surrounding this tournament was about the return to official PGA Tour events for 14-time major winner Tiger Woods, who is attempting to overcome a back injury and a 17-month absence.

Unfortunately, the early returns on Tiger were not good, as a terrible back nine led to a four-over 76, and despite having won this tournament seven times, Tiger finds himself in a share of 133rd place, already 12 strokes behind Rose.

For the first two rounds of the Farmers Insurance Open, the field will be rotating between Torrey Pines’ two courses: the North Course and the South Course, with the host South Course being the only one played after the cut.

Justin Rose’s first round 65 was shot on the North Course, which is traditionally the easier of the two. The statistics today show that, as of the 18 players currently inside the top 10, 14 of them were on the North Course today, with only Hadwin, Fritsch, DaLaet, and Harman playing the South.

Even still, it was a great first round for Rose, who was -2 through 13 before catching fire late on the back, with eagles on the par-5 5th and 9th holes (his 14th and 18th). He shot the low score despite hitting just six of 14 greens, which ranked 106th in the field.

This was a much-anticipated day for PGA Tour fans, who had not seen Tiger play an official PGA Tour event since the Wyndham Championship in August 2015.

Tiger had some good moments at the unofficial Hero World Challenge he played in the Bahamas last month, but there was not much to cheer today. Tiger did get his round to -1 after birdies on 10 and 11, but to say he made a mess of the rest of the back nine would be an understatement.

The combination of just 4/14 fairways with 9/18 greens in regulation would not result in a good score for anyone, and it did not for Tiger in round one.

The big surprise of round one was probably Beau Hossler, who is playing his first event as a PGA professional. The 21-year-old University of Texas superstar badly tore his shoulder in the NCAA Championships in June, which required surgery and delayed his professional debut.

Hossler looked like he was still playing against college kids in round one, shooting an impressive bogey-free 5-under 67 to finish T3.

Also at T3 is little-known PGA Tour rookie Trey Mullinax, who had two spurts of three consecutive birdies to post the most impressive start to his young PGA career.

Nick Watney has barely been heard from in the past year, as an injury limited him to just five starts in 2015-16 with none of those coming after last year’s Farmers Insurance Open in late January. Watney got his round off to a dreadful start, hitting 3-over after five holes, but played bogey-free golf the rest of the way to finish at one-under 71, a fantastic result considering the recent state of his health and his game.

The Farmers Insurance Open field was highlighted by a lot of big names, but for the most part, the big names disappointed. In addition to Tiger’s 76, world #1 Jason Day, who was playing with Tiger, bogeyed six-holes on the way to a one-over 73. Day was the 2015 champion of this event.

2016 PGA Tour Player of the Year Dustin Johnson, also playing in the Tiger-Day group also had a forgettable first round, posting even-par. As usual, DJ was one of the best in the field with driving distance, but accuracy (7/14 fairways) caused him trouble.

Brooks Koepka had his round at -3 through eight holes, but five bogeys over his first eight holes to start the back nine harpooned his round. Koepka finished with a one-over 73 on the North Course.

“Obviously the score is fantastic, I leaned upon most my patience, I was maybe one over through the first five or six holes, I kind of realized it was only the first five or six holes of the tournament, and just to stay with it, and kind of off that dialogue with myself, I went birdie-birdie, which is cool, and then I got the round going, but I drove the ball well today, with ball in hand and obviously with a rough thick and wet it was really important to drive the ball that way.”
–Justin Rose, first round leader