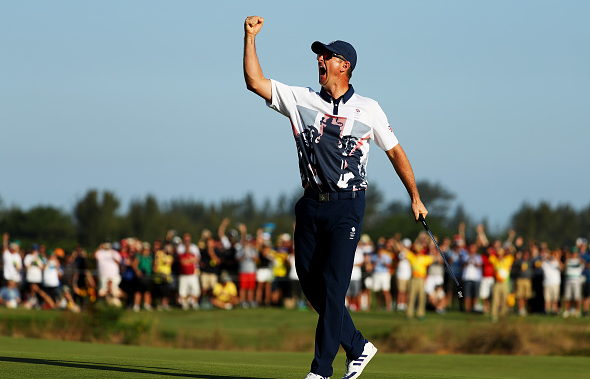 On Thursday, Justin Rose made the first hole-in-one in Olympic golf history during round one. Three days later, the 2013 U.S. Open winner became the first gold medal winner in 112 years.

In what seemed like a replay of the British Open, Rose played what was essentially a match play with Sweden’s Henrik Stenson in the final round. But this time the Swede played the part of Phil Mickelson and came up just short.

The two top-ranked golfers were dead even through 71 holes. And it stayed that way through the first two strokes on the final hole, as both players were off the green for their third shots. But Stenson left his shot about 25 feet below the pin, while Rose stuck his chip to about 2 feet. Stenson went on to bogey, and captured the Silver medal. While Rose birdied, and made golf history.

“That felt better than anything I’ve ever won. It was the best tournament I’ve ever done,” said Rose. “Hopefully we’ve shown Brazil what golf is about. I’m glad it was close. Not for my nerves. But for golf.”

Rose finished the day with a 4-under 67 and a 16-under for the 4-day tournament. Stenson shot a final round 3-under 68 and finished two shots back at 14-under-par.

Matt Kuchar had the round of the day, shooting a record-tying 8-under 63 to grab the Bronze medal. The unheralded American finished at 13-under par, one shot behind Stenson.

Watch Jacques Kruyswijk Walk After His Shot “Like Stenson on Steroids”

“We’re All in Tears”: Richard Bland, Family ZOOM Through Emotions After...

“Spinnier” and “Screaming”: Spieth on the New Titleist Pro V1x

At 48, Richard Bland Claims Maiden Tour Win at the British...

Brooks Koepka and Other Big Names Who Missed the Cut at...