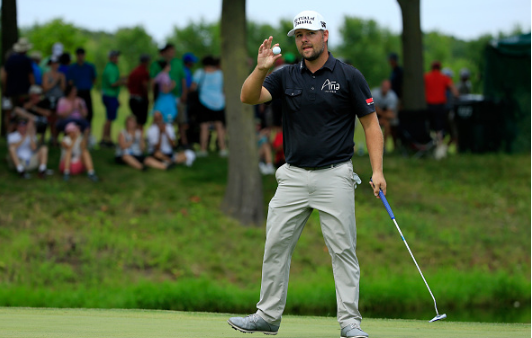 Ryan Moore had one of the best amateur careers ever, highlighted by winning the NCAA Individual Championship, the U.S. Amateur Public Links, the U.S. Amateur, the Western Amateur, and the World Amateur in a brilliant 2004 season.

Moore has found professional golf to be a little more difficult. But after winning the John Deere Classic at TPC Deere Run, the 5th title of his PGA Tour career, it can be said that he is having himself a pretty solid pro career too.

Moore was nearly flawless with just two bogeys over four days. He pulled away from a congested leaderboard with a final round 67 to finish at -22, two strokes better than Ben Martin.

It was a close tournament to start the day, and it did not take Moore long to take the drama out of it. He birdied holes #2 and #4, and went out in three-under 32. With Ben Martin struggling early, and Morgan Hoffman posting back-to-back bogeys on #6 and #7, Moore was able to open up a five-shot lead early on the back nine. Martin tried to make things interesting with three birdies in a row on #12, #13, and #14, but Moore was unflappable, and Martin never quite felt on the verge of taking over the lead.

What It Means For Moore

For the third consecutive year, Ryan Moore has won a PGA tournament. The CIMB winner in both 2014 and 2015 started his 2016 season hot with six finishes of T11 or better in his first nine tournaments.

However, since a T5 at the WGC World Match Play, Moore had struggled to recapture his early season form. He missed his next three cuts after the Match Play, and had no finishes higher than T32, until he put together a T17 at last week’s Travelers Championship.

With this win, Moore vaulted all the way to 23rd in the FedEx Cup standing, assuring that he will be in the field for at least the first few events of the playoff, which starts after next week’s Wyndham Championship.

On Saturday, Morgan Hoffman skyrocketed into contention with six birdies in a row on the back nine for a stunning third round 62. Sunday was a much different story as the wheels came off hard after two birdies in the first five holes.

On 18, he had a two-foot putt to finish solo-third, but missed and settled for a share. The miss could be very costly for Hoffman, as it dropped him from a project 123rd in the FedEx Cup standings to 131st, with only the top 125 qualifying for the playoffs. He is now in need of a good finish next week to keep his playoff hopes alive.

Going into the tournament, the two players everyone was watching were Zach Johnson and Steve Stricker. Johnson had finished in the top three of the past five John Deere Opens, including a win in 2012, while Stricker was coming in hot and had won the Deere in 2009, 2010, and 2011.

Surprisingly, neither factored much into this tournament, aside from Zach Johnson being T2 after the first round. Johnson followed up a first round 65 with two consecutive disappointing rounds of even par. He finished in a tie for 34th.

Stricker never got going, and finished middle-of-the-pack in nearly every major stat. A one-over 72 in round 4 left Stricker in a tie for 52nd. Both Johnson and Stricker are locks for the playoffs, however, and Johnson is still in good shape for a Ryder Cup spot.

This was a critical week for those on the FedEx Cup bubble, a some players made the most of the opportunity. With a T3, Whee Kim moved him from 154th to 125th in the standings, with the top 125 qualifying. Johnson Wagner, who was 125th to begin the week, gave himself a lot of breathing room with a T5 that moved him up to 109th.

“No, not at all, not on this course. Obviously Ben had been playing great all week, and some of the other guys around me. He showed he can rattle off a few birdies in a row really fast, and get real close. I was trying to make birdies down the stretch; trying to stretch that margin out a little bit, but I couldn’t get any putts to go. In the end, I snuck it out!”
~ Ryan Moore, on his level of comfort in round 4