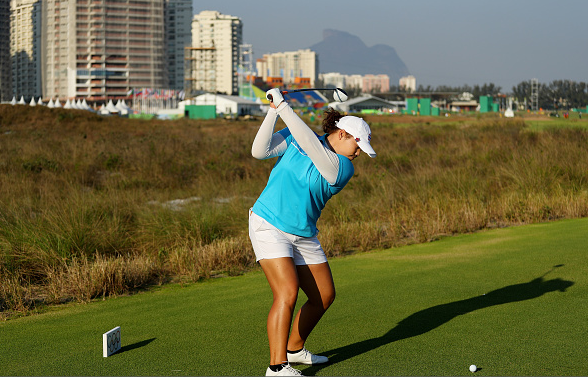 At 6:30 am local time, Brazilian golfer Miriam Nagl hit an important shot. It was a drive that went down the right side of the fairway, putting her in good position on the hole. How she ultimately did on the hole did not really matter (it was a par). But what did matter was that the drive ended 116 years of women’s golf not being played at the Olympics. It ushered in a whole new era of women’s sports.

As for the tournament itself, Thailand’s Ariya Jutanugarn, maybe the hottest golfer on the planet right now, shot a six-under 65 and holds a one-stroke lead over Koreans Sei-Young Kim and Inbee Park, a Hall of Famer who looked like anything but in limited action over the past four months while rehabbing a thumb injury.

It is early, but women’s olympic golf is showing that they were very much worthy of any recent hype.

Ariya Jutanugarn has maintained her recent blistering form at Rio. The world’s #2 ranked golfer has four wins on the LPGA this year, with her most recent being in her last event: the RICOH Women’s British Open, a major.

Back in May, she won three tournaments in a row, giving her four wins in her last nine events. She also has five additional top 10 finishes on the year. As for her round one at the Olympics, her opening nine included four birdies, an eagle, and a double bogey, going out in -4. She stayed hot on the back nine, adding three more birdies for a score of six-under 65.

The big wildcard going into this tournament was 28-year-old Inbee Park. It would be an understatement to say that she has had a season of intense ups and downs. On the positive side, she qualified for the Hall of Fame, becoming the youngest in history to do so. However, aside from a two week stretch in March where she went 2-T6, her results have been dreadful.

It has not been her fault; the poor scores can be most imputed to a severe thumb injury, but she still has not played past Friday since mid-April, which has been very frustrating for her. Her Hall of Fame conquest resulted in her entering a few tournaments that she should have sat out, a which did not go over well with everybody. Today, she was bogey-free, looking like the last four months never happened.

The Rest of the Big Three

World #1 Lydia Ko, and world #3 Brooke Henderson, did not have the great rounds that Jutanugarn and Inbee Park did, but they both rebounded nicely from rough starts and finished the day in contention. The 19-year-old Ko bogeyed 3 and 4, but played the rest of her round in four-under to post a two-under 69.

Henderson, the 18-year-old Canadian sensation, started her round even worse, with a bogey on 3 and a double on 5, but like Ko, she was able to right the ship. Henderson ended up posting a one-under 70.

The Americans have three representative in the field, which trails only Korea. All three Americans played well, led by Lexi Thompson with a three-under 68, a round where she had five birdies to two bogeys.

Gerina Piller had three consecutive birdies in the middle of her round to finish at two-under 69. The other American, Stacy Lewis was over-par late, but birdied two of her last three to post one-under 70.

“I think I wasn’t too anxious because obviously I haven’t played that many events in a while. Obviously I haven’t really performed well, so I wasn’t expecting much from myself, although I prepared very, very hard for this weekend. I practiced hard and gave it all I’ve got. My only goal was just to play like I did in the practice rounds, and yeah, I felt pretty good coming into this week. My injury felt pretty good and ball-striking to putting, everything, felt like I was quite ready. I’m very happy to see the results like today. It’s a good confidence boost”. –Inbee Park