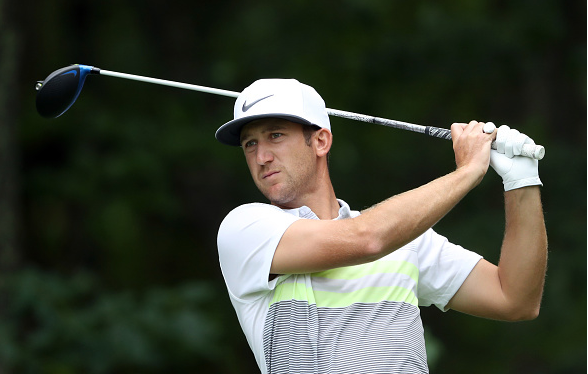 Kevin Chappell has had a great 2016 season, albeit a somewhat frustrating one. He has three runner-up finishes this year, with two of those coming at premier tournaments: The Arnold Palmer Invitational and The Players.

In six years since turning pro, Chappell has made the FedEx Cup playoffs all six times, but that first victory has eluded him. However, after two rounds of the Deutsche Bank Championship, Chappell has given himself maybe his best chance yet. With a seven-under par 64, Chappell at -11 leads Paul Casey and PGA Champion Jimmy Walker by one stroke.

U.S. Open and POTY frontrunner Dustin Johnson was nearly in that group a stroke back of the lead, playing a spectacular round over his first 17 holes, but a double bogey on 18 dropped him into a share of fifth with Smylie Kaufman, who appears to be breaking out of his recent slump.

Playoffs Are Over For These Players

Chappell started his day on an absolute tear, going six-under on his first eight holes. He played the rest of his round one-under for a 64, which tied Jimmy Walker for both the low round of the day and the low round of the tournament. Chappell did most of his damage on the greens, ranking third in the field in strokes gained: putting.

Rookie Harold Varner III appeared to be on the verge of playoff elimination after a round one 71, where it felt like the entire field was under par. Today was a different story for Varner, as a six-under 65 vaulted him into contention.

Rory McIlroy who, like Varner, was at even par after the first round (although McIlroy was not on the verge of elimination), but became relevant to this tournament with a four-under 67, a round that included seven birdies. Russell Knox, maybe distracted by his European Ryder Cup snub, had a poor first round 73, but found his form today, matching McIlroy’s 67, and getting on the correct side of the cut line.

James Hahn could not have played better than he did on Friday, with a bogey-free round of 65 where he hit all 18 greens in regulation. Today, Hahn looked like a shell of his first-round self. His three-over 74 was among the worst rounds in the field, and he is now eight strokes out of the lead he held to start the day. Hahn struggled badly on the greens with a -3.145 at strokes gained: putting the day after being +2.208 in that same statistic.

Billy Horschel, who won the 2014 FedEx Cup with an epic playoff run, had easily the worst round of the day, an 8 over 79, which included three holes of worse than bogey on the back nine. He missed the cut, but will still move on to next week’s BMW Championship.

Suddenly, Bubba Watson is making things difficult for American Ryder Cup Captain Davis Love III. He failed to qualify automatically despite being in the top 8 for nearly the entire season (he finished 9th), but was widely considered a lock as a Captain’s pick. Watson shot his second poor round in a row and missed the cut.

If it were just one bad tournament, he would probably still be safe, but the man who hasn’t missed a cut all year has not had a top 10 since a runner up finish at the WGC-Cadillac. With all the other candidates making the cut: J.B. Holmes, Rickie Fowler, Jim Furyk, and Matt Kuchar, Watson will be spending the next two days wondering if he’s still safe.

“It was a good day. If you would have told me at the beginning of the day, I would have taken it. All in all, I’m happy with where I’m at.”
–Kevin Chappell, second round leader