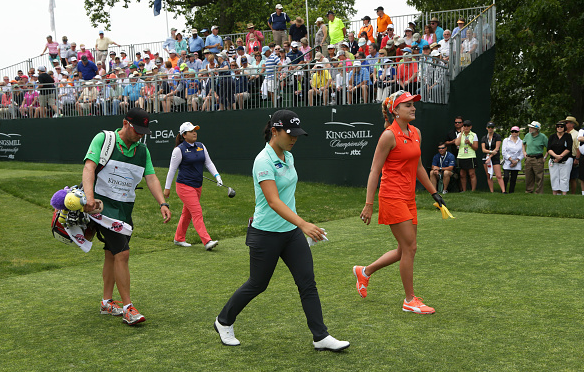 It’s that time of the season again on the LPGA Tour, a brutal, but exciting, stretch where the best female golfers in the world tee it up for 12 straight weeks of tournaments, with three of them major championships.

It all starts with this week’s Kingsmill Championship Presented by JTBC in Williamsburg, Virginia.

Twenty of the top 25 players in the Rolex Rankings will be among the 144-players teeing it up this week – all chasing a $1.3 million purse at the Kingsmill Resort’s River Course.

At the 2016 Kingsmill Championship, Ariya Jutanugarn fired a final-round 67 to secure her second of five tournament titles in 2016. In all four rounds, Jutanugarn posted sub-70 scores, to finish at 14-under par, one shot ahead of rookie Su Oh of Australia.

Gerina Piller and Sei Young Kim of South Korea finished tied for third at 12-under par.

“No matter my ranking going to be, they going to love me the same.”
-Ariya Jutanugarn talking about her family and the pressure of chasing No. 1

Also to support tourism in Williamsburg, the surrounding region and Virginia with what will be the largest sporting event in the area this year, and raise money for local charities and promote community involvement.

Storyline: Event No. 11 of Race to CME Globe

This week’s Kingsmill Championship Presented by JTBC will mark the 11th event in the season-long Race to CME Globe. ANA Inspiration champion and World No. 2 So Yeon Ryu holds a narrow lead in the current Race to the CME Globe standings with 1,605 points.

Reigning Race to the CME Globe winner Ariya Jutanugarn is close behind with 1,525 points, and she is followed closely by Cristie Kerr (1211) and Inbee Park (1082).

In 2017, the reset points for the Race to the CME Globe will be modified slightly. As a result of these modifications:

The Kingsmill Championship field features 21 of the 37 2017 LPGA Tour rookies, the most to tee it up at a tournament this season.

With seven tournaments under her belt and seven top 25s to boot, South Korean rookie Sung Hyun Park is the early leader in the Louise Suggs Rolex Rookie of the Year award. With 406 points, Park leads Angel Yin, who has four top 25s in eight events this season, by 181 points.

In 2017, the LPGA expanded its global representation with the addition of five rookies from new countries: Aditi Ashok (India), Laura Gonzalez Escallon (Belgium), Daniela Darquea (Ecuador), Olafia Kristinsdottir (Iceland) and Krista Puisite (Latvia). Ashok, Escallon and Kristinsdottir will be in action at the Kingsmill Championship.

Kingsmill is the only LPGA Tour stop in Virginia, and three LPGA players will tee it up in a place that is close to their hearts.

Rolex Rankings No. 28 Brittany Lang, the 2016 U.S. Women’s Open champion, was born in nearby Richmond, Virginia. In nine appearances at the Kingsmill Resort, her career-best finish is 12th in 2014.

Sandra Changkija was born in Alexandria, Virginia, and she has yet to miss the stop at the Kingsmill Championship, making the cut in three of her five starts.

Brittany Altomare was a four-time All-American and the 2013 ACC Player of the Year while attending the University of Virginia. At the 2016 Kingsmill Championship, she recorded her first career top-20 finish (T-18), and has since earned four more.