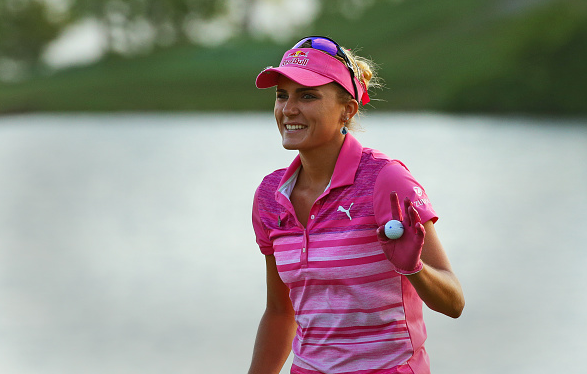 Lexi Thompson posted a 2-under 69 on Saturday and takes a 3-shot lead into the final round at the Kingsmill Championship.

In Gee Chun, who shot a 4-under 67, is alone in second place, three strokes back of Thompson.

How Lexi Did It

Thompson wasn’t quite as impressive today as she’d been in the first two rounds, but the 22-year-old star did post her third straight round in the 60s to maintain the same three shot lead she held after 36 holes.

Thompson played to even-par through eight holes, but a key birdie on the par-4 9th allowed her to make the turn at 1-under. Two more birdies on 13 and 15 got her to 15-under, and a four stroke lead, but a late bogey on 17 dropped her back to 14-under.

“I feel good. I played very well today. Pretty solid, just was all over the lips today on the greens. But I put some good strokes on a lot of my putts, so that’s all that matters. Hopefully bring that into tomorrow.”
–Lexi Thompson, 54-hole leader

.@Lexi game plan for tomorrow? 1) Stick to her routine 2) commit to her line off the tee 3) Have fun w/ caddie between shots@KingsmillLPGA pic.twitter.com/aUXGaBmIyg