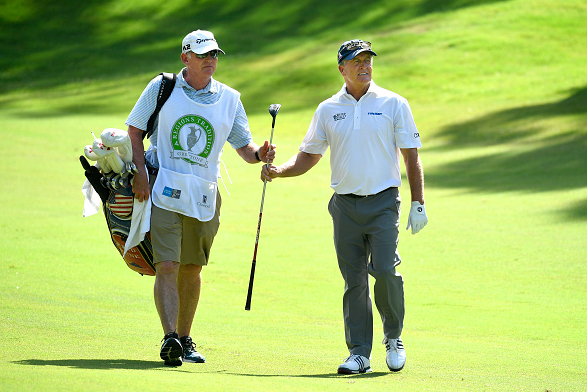 Fred Funk posted a 2-under 70 to maintain his lead at the Regions Tradition through 54 holes.

Funk, who is seeking his fourth Champions Tour major, stands at 14-under, one shot up on third round playing partner Scott Parel.

First round co-leader Scott McCarron (69), and defending champion, Bernhard Langer (66), are two shots back at 12-under.

Funk, 60, will once again be paired with Parel, as he seeks to win his first Champions Tour event since 2012.

Meanwhile, Langer, with a win on Sunday, would tie Jack Nicklaus’ record of eight major titles on the senior circuit.

Glen Day holes out for eagle on the 18th. What a way to finish!

He capped off his round with an eagle to end the day with a 69. pic.twitter.com/vK6FQTE7YZ