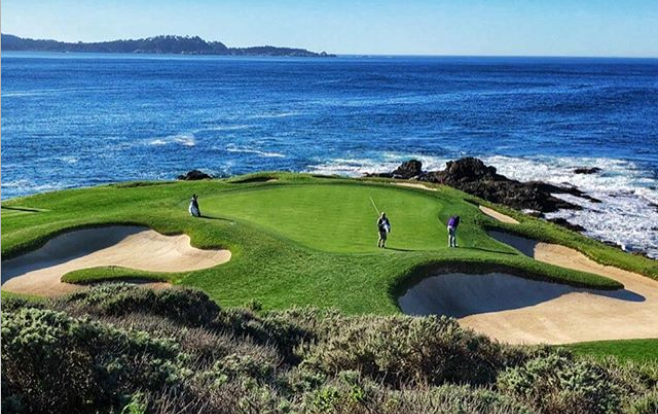 The AT&T Pebble Beach Pro-Am, the PGA Tour’s long-running celebrity-focused event, takes center stage this week in what is the sixth of the seven-tournament “West Coast Swing.”

The climate on the Monterrey Peninsula – normally rainy and overcast this time of the year – appears to be changing this week and will offer temps in the mid-high 60s with four days of sun expected.

According to a group called the Climate Coalition, two of the UK’s most historic golf courses are going to, well, disappear.

With a headline titled, “Open Venues at Risk of Disappearing, says Climate Coalition Report,” the article continues its fear-mongering ways with a sub-head that reads: “Open Championship venues such as St Andrews and Royal Troon could be under water by the end of the century if sea levels rise even slightly as a result of climate change, according to a new report.”

They tone it down (not really) in the article with quotes such as: “Only a small increase in sea-level rise would imperil all of the world’s links courses before the end of the century.”

It continues, “More than 450 years of golfing history at Montrose, one of the five oldest courses in the world, is at risk of being washed away by rising seas and coastal erosion linked to climate change.”

Stephen Anthony, the club secretary at Royal Troon, wasn’t buying the hype, though. He told BBC, “We’re not overly concerned. We’ve been proactive over the last 30 years. We’ve put lots of things in place to protect our course into the future.”

Of course, by projecting a date of 2100 the doomsday prognosticators skate free from criticism, as we’ll all be dead.

Now onto a few headlines:

1.) Jordan Spieth’s early-season struggles (T9, T18, MC) are being blamed on mononucleosis, which he contracted back in December. The illness apparently set him back in terms of “energy and preparation,” writes Bob Harig of ESPN.com.

2.) According to many Tour players, Pebble Beach is not the most desirable tournament on the schedule due to its crappy weather, lousy greens and long rounds. But Peter Jacobsen says the week is more about honoring the sponsors who ultimately pay the bills, writes Doug Ferguson of AP.

3.) Where in the world is Danny Willett? Well, the 2016 Masters Champion, who is now ranked No. 181 in the world, will be teeing it up this week at the ISPS HANDA World Super 6 Perth – a hybrid stroke-play/match play event. The now 30-year old, and former World No. 9, is excited to give the unique format a try.

Paige Spiranic, a pro golfer/fitness model, revealed her big secret yesterday. The social media star will be featured in the 2018 issue of S.I.’s Swimsuit edition.

Paige wrote, “This was such a hard secret to keep! But I’m so honored and humbled to be included in #SISwim 2018! This issue is about self-love, empowering women, body positivity, and encouraging everyone to be kind.”

Because nothing says “enpowerment” and “encouraging kindness” like half naked pics.

John Daly grips it and rips it (in slo mo, natch), during Wednesday’s pro-am at the Boca Raton Championship.