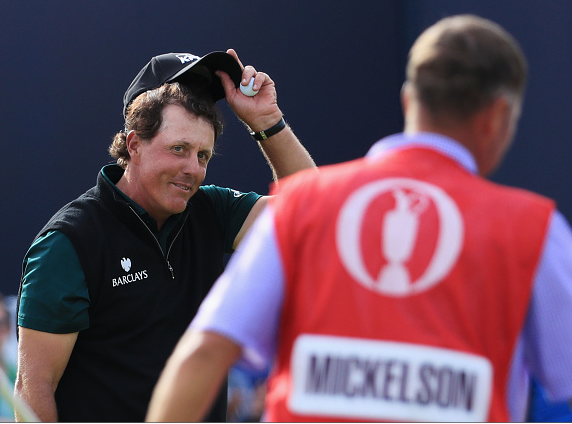 Phil Mickelson fired a course record 8-under 63 at Royal Troon and leads the 145th Open Championship by 3 strokes over Patrick Reed and Martin Kaymer who are tied for second place at 5-under.

Mickelson had a chance to shoot an Open record 62, but his birdie putt on 18 lipped out.

A logjam of eight players are tied in the 4th spot at 4-under, including Justin Thomas, Keegan Bradley, and defending champion Zach Johnson.

“This one’s going to stay with me for a while because of the historical element of the Major Championships. There’s a lot of guys that have shot 63, but nobody has shot that 62. That would have been really something special. I’m just not going to have opportunities like that to do that. So to have that putt lip out, that’s going to sting for a while.”
Phil Mickelson, first round leader, on just missing a putt for 62

“It was just one of those yucky days.”
Sandy Lyle, 1985 Open Champion, on his opening round 85

“It’s a little frustrating. I actually drove it pretty good today but every time I hit an iron I kept on missing it left. I understand the next few days are going to be difficult, so the scores will probably come back. If I can just play, good solid golf, and get the ball in front of me, I think I can inch my way back in.”
Jason Day, World No. 1 golfer, on his opening round 2-over 73

It was just too much for Phil's caddie. #TheOpen pic.twitter.com/tmeO76iS1Y

Phil Delivers on the Postage Stamp

Watch: There was a bit of Phil Mickelson magic with the wedge at the Postage Stamp #TheOpen pic.twitter.com/br4hGHR7Df
— The Open (@TheOpen) July 14, 2016