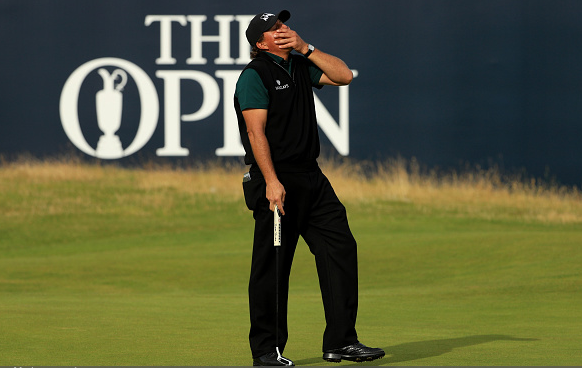 Nobody makes being great look more exhausting than Phil Mickelson.

Only Phil could shoot a flawless, bogey-free major championship-tying record round of -8 (63), and still walk off the course leaving everyone feeling dejected.

“I saw all these highlights, and I still feel like crying,” said Mickelson minutes after the historically tremendous round.

He is a legitimate Hall of Famer. He has 42 victories in a career replete with success. He has won five major championships, tying him with golf legends Byron Nelson and Seve Ballesteros. On top of that, Mickelson has matched a high apex with stunning longevity.

At 46-years-old Mickelson is still is a force to be reckoned with. The world’s 19th ranked player is fifth on the PGA Tour this season in scoring average, and eighth in birdie average. Leading The Open Championship by three strokes after the first round might be unexpected, but based on the form he has shown this season, it isn’t shocking either. The man looks like he could play to 60 and become the Gordie Howe of golf.

Still, it could have been so much better, and golf fans have not let Mickelson forget that.

He was one of the best collegiate golfers ever. The Arizona State star won three individual NCAA championships (tied for the most in history), and 16 total tournaments. He even won a PGA Tour event while he was still enrolled at ASU, which is basically unheard of.

As a pro, he was fantastic right from the start. In 1993, his first full year on Tour, he won two tournaments, and had four top-10s in 24 events. Over his first six years on Tour, he won 12 times, a scorching pace.

Yet, his early PGA career was largely defined by what didn’t happen.

Major after major completed, without Mickelson holding a trophy. That number famously reached 42 before the monkey finally came off his back at the 2004 Masters. He suffered through a myriad of close calls.

At one point, he had 17 top-10s in majors without a victory, the most well-known being a second place to the late Payne Stewart at the 1999 U.S. Open, when his putter let him down late, something that would become a recurring theme.

Even after his Masters breakthrough, he was constantly denigrated for the successes that he let slip through his fingers. There was the disastrous double-bogey on 17 at the 2004 U.S. Open, which led to a second place at the hands of Retief Goosen. That was his third runner-up finish in the U.S. Open.

His fourth was even more painful. In 2006 at Winged Foot, with a one-stroke lead on the 72nd hole, he inexplicably took out his driver and sent his tee shot careening into a hospitality tent. From there he would double-bogey and lose by one to Geoff Ogilvy.

There would be others. He has six runner-up finishes at The U.S. Open, the only major he has not won, in addition to 14 finishes between 2nd and 5th place at the other three majors. In all, he has finished in the top five of a major 26 times. That cannot be described as anything short of phenomenal.

Still, all the close calls has made it feel uncomfortably disappointing. As sports fans, we think we have 20-20 vision of what could have been, and Phil has an enormous discrepancy between what is and what could have been. It is similar to how many of us view Ken Griffey, Jr in baseball from a historical perspective. Nobody who watched him dominate in Seattle could say that he was not absolutely, positively outstanding, and one of the best ever. Yet… those Cincinnati years are difficult to forget. So many highlights of Griffey leave the viewer saying, “if only…”.

In round 1 at Royal Troon, Mickelson again was right on the periphery of something legendary. Then, as his putt on 18 barely lipped out, the round was transformed from legendary to a painful, heartbreaking 63. A round shot 27 other times in major championship history. It obliterated the course record of 66, but sadly, that is not the most indelible aspect of his historically stroke round.

If that putt falls, Mickelson is in the 62 major club all alone. It would have been a deserving record for the man who has spent 771 weeks in the top 10 of the world rankings, but has never been #1. For a lot of that time, he was the #2 to Tiger Woods. Second in the world rankings is an incredible feat; a peak that tens of thousands of PGA Tour golfers have failed to reach, but again… so close to being the best, but it did not quite happen.

This round was a microcosm of Mickelson’s career: awe-inspiring and one of the best of all time, but just a touch short of being number one. Mickelson was THIS close to having his own page in the record books, but instead had to settle for a 28-way tie.