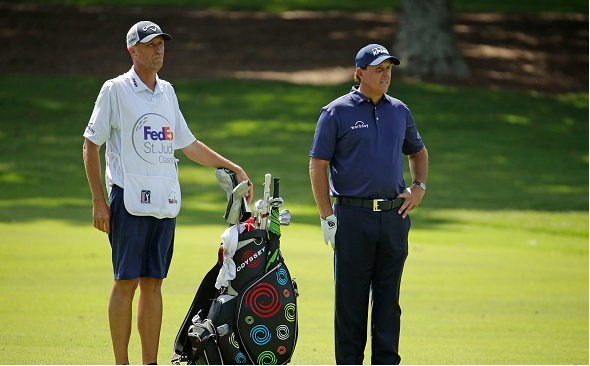 Phil Mickelson, and his longtime caddie, Jim “Bones” Mackay, released dual statements on Tuesday, announcing they have split up as a player-caddie team.

Mickelson has been with Bones since early 1993, with the relationship lasting over 25 years. Their final tournament together was the FedEx St Jude Classic in Memphis, where Phil finished at 7-under, good for T9.

As a team, they compiled 41 PGA Tour victories, including five major championships. They will go down as one of the most successful player-caddie duos in history.

“After an amazing 25-year run, Phil and I have mutually decided to go our separate ways. Player-caddie relationship don’t often last that long,” said Bones in a statement. “I will always be grateful that I was around to witness so much of Phil’s career. When Phil hired me in 1992, I had one dream: To caddie in a Ryder Cup. Last year, at Hazeltine, Phil played in his 11th straight Ryder Cup. It was so cool to have a front row seat. I wish Phil nothing but the best. His game is still at an elite level, and when he wins in the future [definitely the Masters], I will be among the first to congratulate him.”

“After 25 very rewarding and memorable years, Bones and I have mutually decided to end our player-caddie relationship. Our decision is not based on a single incident. We just feel it’s the right time for a change,” said Mickelson in his released statement. “Bones is one of the most knowledgeable and dedicated caddies in the world. He is always prepared and has the ability to make decisions in pressure-packed situations. Bones is without a doubt one of the most thoughtful people that I have ever known. The next player to work with him will obviously be very lucky.”

Tim Mickelson, Phil’s younger brother, and a former golf coach at Arizona State, will take over for Bones. He is currently the agent for rookie phenom Jon Rahm.

He looped for Phil in Mexico during round two after Mackay fell ill.

The final tally for Phil and Bones, after 25 years: 42 total PGA Tour victories, 186 top-10s, more than $83 million in official earnings.

Golf Twitter already speculating a Bones-to-Rahm partnership. I know nothing… but it's not as if Adam Hayes hasn't been doing a great job.

Bones said when he started, wanted to caddie in one Ryder Cup. Was in every Ryder Cup and Pres Cup since 94. Attended 93 RC to help

Sunday was the 25th anniversary of Phil Mickelson & his caddie "Bones" working together. Today, the two parted ways. pic.twitter.com/2aWpstE9F3