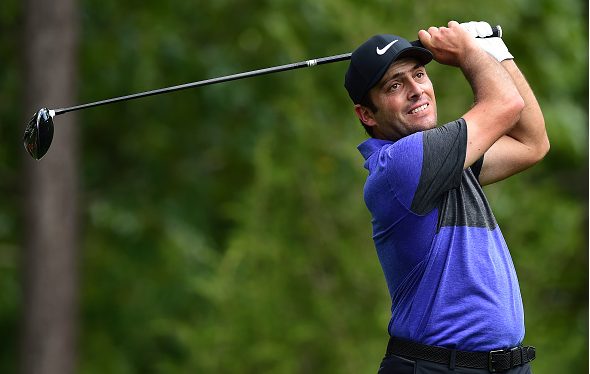 Francesco Molinari posted a 6-under 66 in the opening-round of the Wells Fargo Championship, and leads by one over a foursome of Alex Noren, J.B. Holmes, Grayson Murray, and Brian Campbell who are all at 5-under.

Molinari bogeyed the second hole and was 1-over after two holes, but then dropped 5 birdies over the next seven holes to make the turn at 4-under. On the back, the 34-year-old Italian was even-par through the first 5 holes (10-14), but then closed strong with two birdies down the stretch, including a chip-in on 18.

Rounding out the top-10 is a group of six players tied for 9th at 3-under, including red-hot Jon Rahm.

Dustin Johnson, playing for the first time since incurring a freak back injury at the Masters, had a solid day, overall, finishing with a 2-under 70. And 5-time major winner, Phil Mickelson, posted a 1-under 71, with 5 birdies, 4 bogeys, and one amazing par on the final hole (see below).

Hole of the Day

Phil Mickelson with a ho-hum par-5. Three shots into the hazard, 0 shots hit the fairway, 1 putt for par.

“Since I hadn’t played in so long, I’m happy with the way I played. I didn’t score that great, didn’t really hole that many putts, but other than that, I played really well. I think I hit 16 greens and I hit the ball great.”
-Dustin Johnson, 2-under, T