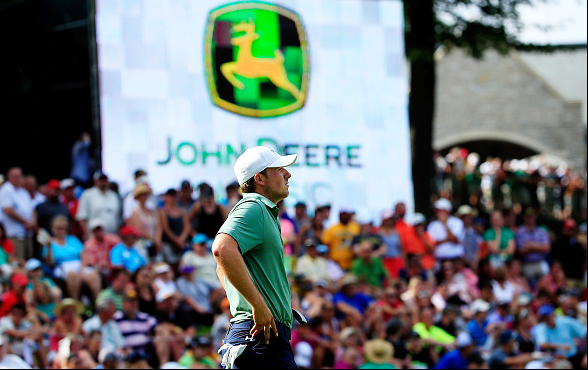 Jordan Spieth will go another year without returning to “defend” his second John Deere Classic title. And there’s no guarantee he’ll get around to doing it in 2018, either.

That can’t bode well for the tournament, right?

Well, yes and no.

Certainly, any tournament benefits when it can boast the presence of Spieth, or any of the top half-dozen or so players in golf’s world rankings. That’s especially true when it comes to TV and the Internet, as fans scratch their itch to see how their favorites are faring.

Then again, it’s worth noting that the John Deere Classic was honored by the PGA Tour as its 2016 Tournament of the Year. And that week hit new highs with $10.54 million in charitable giving – a 20 percent increase from the previous year.

All for a tournament without Jordan Spieth – or anyone else among the top 20 in the world rankings, for that matter. Which took place, in last year’s rejiggered schedule, the same week as golf’s return to the Olympic stage.

“Everyone in town rallied, as they always do, to fill the seats,” tournament chief Clair Peterson told Quad Cities reporters last week.

“It’s not determined by one player. One player certainly helps if it’s a highly-ranked player – especially a beloved player like Jordan is.”

There’s no question that Spieth and the John Deere Classic have been good for each other. TPC Deere Run was the site of Spieth’s maiden PGA Tour victory in 2013, playing on “special temporary” status that allowed him to take a sponsor invitation.

He tied for seventh in his 2014 title defense, then won again the next year by outdueling Tom Gillis in a playoff.

With the JDC drawing the slot opposite the Olympics last year, a title defense never was in the plans.

Spieth was set for Rio – until he wasn’t, joining the exodus of players worried about the Zika virus. Even then, he decided to sit out completely in deference to the Olympic event.

No such conflict this year, with the John Deere returning to its usual date ahead of the Open Championship. Early last week, though, Spieth announced he instead would head across the Atlantic to get an early start on preparing for Royal Birkdale.

“I love the tournament, I love the golf course and, more importantly, I love the people,” Spieth said in a statement. “While my schedule doesn’t permit me returning to the Quad Cities this year, I plan to be back in the future.”

“We’re going to be here until 2023,” Peterson quipped, referencing the end of John Deere’s current sponsorship, “and he’s going to be playing for another 20 years.”

Too Big To Play

It’s a conundrum faced by many a tournament that butts up on either side of a major. When a player’s career progresses to the point where winning majors becomes the measuring stick, priorities change. And some favorites can be nudged aside.

Tiger Woods’ first PGA Tour victory came in Las Vegas in 1996. He defended the following year, then never came back. (Well, except for his late-spring “Tiger Jam” fundraising concert.) Same for Dustin Johnson after winning the old Turning Stone event in 2008, though in fairness that stop only lasted two more years.

Woods even cut loose a pair of “hometown” events after 2005, ending his attendance at Riviera (though that’ll change with his foundation now running the event) and Disney.

Spieth now has racked up 10 wins before age 24, so his measuring stick has changed. And with overseas travel in play, the John Deere doesn’t hold the same sway as, say, playing his home-state Houston Open before the Masters.

Meantime, the JDC actually might be in a better position to absorb such a parting than a tournament in a bigger market. For the Quad Cities, as with such locales as Hilton Head Island and the Greenbrier, the PGA Tour’s arrival is the region’s sporting event of the year.

“It’s a weeklong festival,” said Steve Wilmot, director of the RBC Heritage on Hilton Head. “We aren’t competing with the NFL or Major League Baseball.”

Two years ago, the RBC Heritage was fortunate to retain Spieth after his Masters triumph. Walkup sales boomed. Spieth sat out last year, but they got then-No.1 Jason Day. Neither were in the field this April, and the event still exceeded attendance and sponsorship targets.

“We’re selling today an experience for 10 months from now, and people are signing up and buying tickets,” Wilmot said. “Certainly they want to see the best PGA Tour professionals, but we have no idea who’s going to be in our tournament. So it’s about the experience; it’s the customer value.”

So it is, too, for the John Deere Classic. The tournament still has favorite son Zach Johnson, a two-time major champ who grew up in Cedar Rapids and calls the JDC his “fifth major.” His involvement is such that he sits on the event’s board of directors.

Steve Stricker, who won three straight from 2009-11, also draws a huge following. Ryan Moore, whose win last year sparked a late-summer run that ended with scoring the decisive Ryder Cup point at Hazeltine, is back to defend. Brian Harman, the 2014 champ, is weeks removed from his U.S. Open splash.

“I think history will tell us it is going to be an exciting finish and a really good champion when it’s all said and done,” Peterson said.