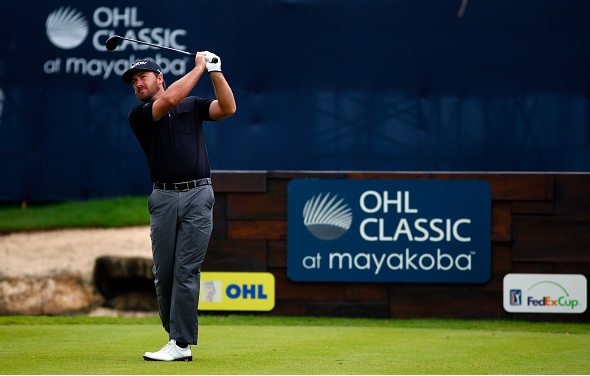 Fans of the PGA Tour are on a day-after high from Rod Pampling’s unlikely, feel-good win at the Shriners Hospitals for Children Open in Las Vegas.

Just how unlikely was the win? All of these things were true about Pampling before yesterday:

In just four short days, Pampling was transmuted from a has-been who was struggling to qualify for even the weakest PGA Tour events to a player who will now be at nearly every big event this season.

That is one of the great things about professional golf: anyone can suddenly figure out their swing, get into a groove, and claim victory in any given week. This is not like pro tennis where a small handful of players win every tournament, and 98% of the field is composed of minor, irrelevant, quickly disposed of obstacles on the way to an inevitable Novak Djokavic, Andy Murray, or Roger Federer victory.

In addition to Pampling this season, this was also well-illustrated last season with Wells Fargo Championship Winner James Hahn, who triumphed coming off 8 consecutive missed cuts, and Quicken Loans National Champion Billy Hurley III, a navy grad with no prior top-40s on the season, among others.

The bar was set very high for this week’s tournament, the OHL Classic at Mayakoba, which takes place in the tropical wonderland of Mexico’s Yucatan Peninsula, one of the world’s most popular tourist destinations.

It will be all business, however, for the 128 players in the tournament field, who are looking to either continue promising form early in the 2016-17 PGA season, or hoping to find it before this season gets away from them.

Despite an amazing location, the OHL Classic at Mayakoba used to bring in some of the weakest fields on Tour.

Played for years opposite the Match Play Championship, the top 64 players in the world had much more incentive to play the WGC event that had 64 players competing for an $8.5 million purse than the one that had 128 players competing for a $3.7 million one. Since 2013, however, the OHL Classic has become more prominent, as it has gotten a more attractive slot in the schedule and awards a purse that has more than doubled since 2012.

El Camaleon Golf Club, the host of the OHL Classic, is a Greg Norman design in Playa del Carmen, Mexico. The course boasts a variety of tropical settings, including a jungle, mangroves, and ocean-front holes. From a scenic standpoint, it might be the best the Tour sees all year.

The OHL Classic has been played since 2007, when its inaugural tournament was won by the 50-year-old Fred Funk, who became the oldest winner of a PGA Tour event in over 30 years.

The defending champion is Graeme McDowell. McDowell became the first Mayakoba winner from outside the United States in the tournament’s history when he defeated Scotland’s Russell Knox and American Jason Bohn in a three-man playoff. The catalyst for the victory was his second round eight-under 63.

Derek Fathauer was the third round leader, but his final round 71 dropped him to fourth place, allowing McDowell to get into the playoff with a 66, where he won with a birdie on the first playoff hole.

Lowest Final Score: The OHL Classic at Mayakoba’s record score is 263, shot by Harris English in 2013.
Low Round: 61 (Roland Thatcher)

Local and native players tend to get the most live fanfare at PGA Tour events, and the OHC Classic should be no different when Mexico’s Rodolfo Cazaubon tees off on Thursday.

Mexico has long been a very small player on the international golf scene, and while Cazaubon has not done much to instill confidence in his nation that he will be the one to put them on the world golf map, he has shown some promise.

The 27-year-old North Texas grad was Mexico’s lone Olympic representative in Rio, finishing at one-under par despite a first round 76. He went 66-68-73 over the final three rounds to finish in a tie for 30th place. He also made some waves when he finished T3 at last year’s Puerto Rico Open.

Cazaubon spends most of his time on the Web.com Tour now, where he is coming off a difficult season. In 19 events in 2016-17, he only made six cuts with a high finish of T13 at the Nashville Golf Open. He had only two top 25s and did not qualify for the Web.com Tour Finals. His last seven events of the year comprised of six missed cuts and a T56.

Which Rodolfo Cazaubon will show up at Mayakoba this week? Will it be the one who looked competent at the Olympics and great in Puerto Rico? Or will we see the Cazaubon who has been largely irrelevant on the Web.Com Tour?

Regardless, he will have the attention of the crowds, as one of just two Mexican golfers in the field. The other Mexican, 29-year-old Robert Diaz from Veracruz, finished 58th on the 2015-16 Web.Com Tour money list, but has never made the cut in a PGA Tour Event.

Last season, former U.S. Open winner Graeme McDowell became the first non-American to win at Mayakoba when he finished at -18 and defeated Russell Knox and Jason Bohn in a playoff. This year, we will see how McDowell fares with a target on his back.

McDowell made his 2016-17 PGA debut last week when he shot matching 70s to miss the cut in Vegas. He will obviously need to do much better this week if he wants to successfully defend.

McDowell is coming off a strong season in the U.S, and a decent one in Europe. On the PGA Tour he had five top 10s, with the Mayakoba win and a solo-third at the RSM Classic, although accounting for strength of field, his best finish was probably his T9 at The Players.

In Europe, which is still in their 2016 season, he is well down the list on the Race to Dubai Standings (56th), but does have three top 15 finishes in three of his last five events, including a T4 at the British Masters three weeks ago. The best part of McDowell’s game has been his driving accuracy, which is important at a course like El Camaleon.

Most of the PGA has made their 2016-17 season debut, although we’re still waiting on some elite names, most notably Jason Day and Tiger Woods. Two of the better players on Tour, Jim Furyk and Luke Donald will be making their season debuts this week in Mexico.

Furyk is coming off a season that is about as up-and-down as they come. He missed three months of the season recovering from wrist surgery, and had two great moments when he came back: his T2 at the U.S. Open at Oakmont, and his final-round 58 at The Travelers Championship, the single lowest score out of the million-plus rounds that have been played in the history of the PGA Tour.

Outside of those, he was not especially impressive in 2015-16, doing little in the bigger events (T59 at the Open Championship and T73 at the PGA Championship), not qualifying for the last two FedEx Cup playoff events, and not quite playing well enough to land a spot on the Ryder Cup team. The 46-year-old Furyk should be especially motivated to play a full quality season, and is definitely among the favorites at Mayakoba.

Luke Donald, a former world #1, had a largely forgettable 2015-16 season, but like Furyk, there were some high points. He finished runner-up twice (RBC Heritage and Wyndham Championship), and played well enough to make it to the second to last playoff event, although not making the final was disappointing.

His European season was not anything special either; Donald’s best finish in seven Euro Tour events was just T27. Still, his success in recent years (2010-2012 mostly) makes him one of the biggest names and favorites at Mayakoba.

If there is one player who seems to have El Camaleon figured out, it might be Jason Bohn, who has done everything but win the last three years. In last year’s edition, Bohn finished T2 after losing to McDowell on the first playoff hole. He was T7 the year before, and T3 in 2013-14.

Bohn would love to have a start like he did in 2015-16 when he went T3, T2, T39, T2 over his first four events. So far in the new season, that has not been the case, as Bohn has not finished better than T48 in any of his three events. He is hoping his familiarity and confidence with the course will allow him to take another step forward this year.

The winner of the 2013-14 OHC Classic at Mayakoba, English holds the course record, finishing at -21 in his winning effort. English showed amazing consistency in last week’s tournament, shooting four consecutive rounds of four-under 67 in Vegas to finish T4.

One of last year’s runner-ups to McDowell, Knox notched two victories in 2015-16. He has finished in the top 10 of both events he has played in this new season, a T10 at the CIMB Classic, and a T9 at the WGC-HSBC Champions.

One of the best international players in the field, the Indian golfer was T3 at his last event, the CIMB Classic in Kuala Lumpur, Malaysia. This will be his first appearance at the OHC Classic.

One of the more popular players everywhere he goes, the ostentatious Poulter just recently came back after a four-month layoff due to a foot injury. In his first tournament back, he led the first round of an Asian Tour event, before falling back on the weekend. He then went on to finish T17 at the CIMB in Malaysia and then missed the cut two weeks ago at the Sanderson Farms Championship. This will also be Poulter’s first appearance at El Camaleon.

No stranger to this tournament, Vegas has made five prior appearances, although none of those resulted in a finish of better than T45. The long-hitting Vegas is coming off a successful 2015-16 where he notched one victory (RBC Canadian Open), and four other top 10s.

Last year’s NCAA Individual Champion, the 20-year-old University of Oregon prodigy was in contention at last week’s tournament in Vegas, the first PGA tournament he has contended at since declaring pro after last year’s U.S. Open. He was in third place going into the weekend, and finished T10.