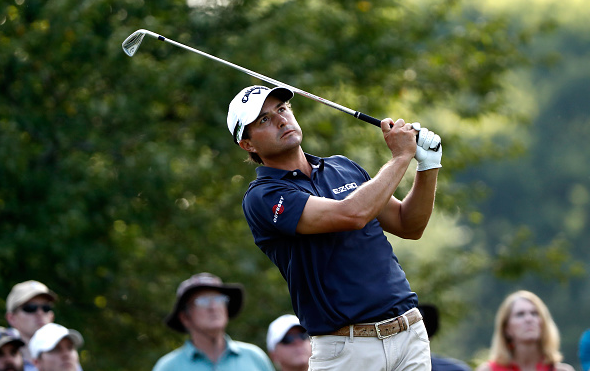 Weather was an enormous concern going into the PGA Championship this week, but for at least one day, the field dodged a bullet. 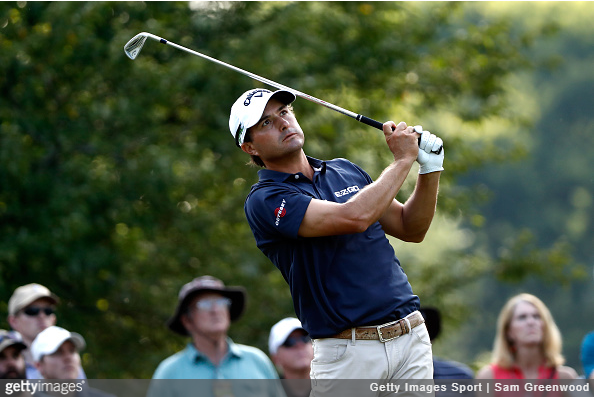 Conditions at Quail Hollow Club’s first major were mostly serene for the first round, which likely helped scoring as a whole, but the Charlotte, North Carolina gem of a course still asserted itself as a major-worthy venue.

Just 24 of 154 players are in red numbers after 18 holes, led by the 4-under 67s shot by the duo of Denmark’s Thorbjorn Olesen and American Kevin Kisner.

They hold a one-stroke advantage over a group of five that includes U.S. Open Champion Brooks Koepka.

Most of the attention has been directed towards Jordan Spieth, the Open Champion who is gunning for a career Grand Slam this week. His first round showed mixed results, as Spieth sits five strokes back after a 1-over 72.

One common denominator in the rounds of Thorbjorn Olesen and Kevin Kisner: they were among the very few who were able to birdie the 18th hole, the last hole of the dastardly three-hole stretch known as “The Green Mile”. 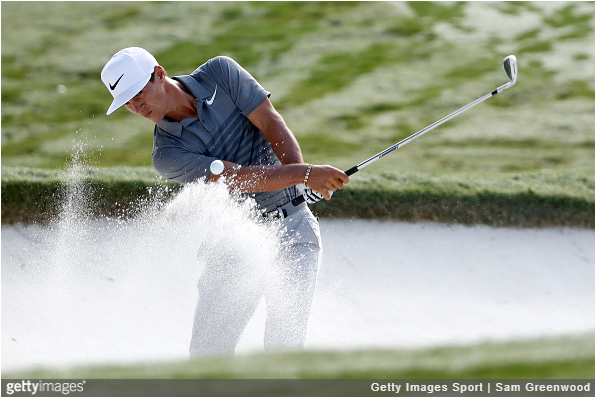 “I felt like I gave myself a lot of opportunities, and obviously it was a very, very nice way to finish with that long putt on 18,” said Olesen.

They also both had the same birdie/bogey distribution, carding three birdies and one bogey on both nines. Olesen, who was in the early wave, hit just 7 of 14 fairways, but was still able to hit 12 greens, and was dialed-in on the greens, gaining 3.7 strokes on the field in putting alone.

Kisner, the winner of this year’s Dean & DeLuca Invitational, was able to one-up Olesen on all three of those, hitting three more fairways, three more greens, and was even better in strokes gained: putting (4.03). It resulted in the same score, however.

“I felt confident. I was hitting the driver nice starting out. There’s about four or five holes that I have to birdie to compete and I birdied them all today. So that’s kind of been my game plan,” said Kisner. “Make a lot of pars and get to a par 5 or one of those short par 4s, I can do my wedge game and get it to ten or 12 feet. That’s my plan. Other than that, I’m playing for par.”

One of the big early surprises was the great play of Jim Herman, who led for much of the morning. 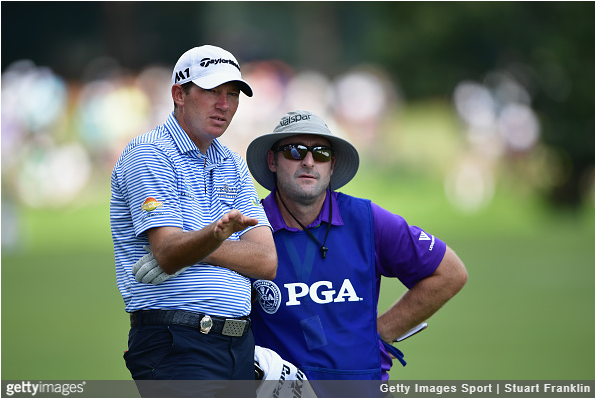 Herman has missed three of his last four cuts, but it would be hard to believe based on his first 14 holes, where he carded four birdies and no bogeys. A bogey-bogey finish dropped him to -2, but overall, a much better round than was expected from the 39-year-old.

“Little disappointed with the finish. I know it’s a difficult finish,” said Herman. “Overall very happy. Probably my best start in any major.”

Nobody has played better in the major season so far than Brooks Koepka, who won the U.S. Open while adding a T11 at The Masters and a T6 at The Open Championship.

The 27-year-old bomber was back in major form in round one, posting an incredible 8.5 strokes gained: tee-to-green in a three-under 68. After four birdies over his final seven holes, Koepka is just one back of the leaders. 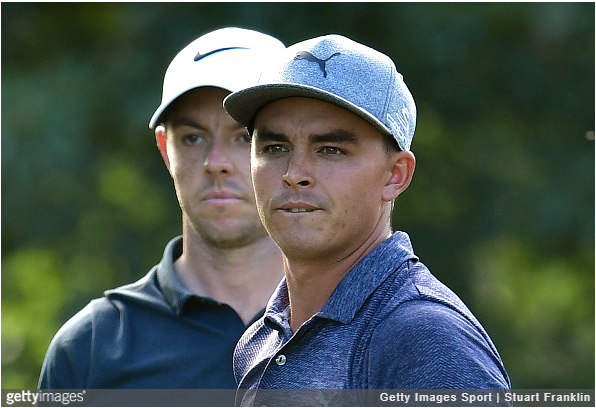 Hoping to finally capture major championship #1, Rickie Fowler again got off to a strong start. A triple-bogey on the 5th marred an otherwise tremendous round, as Fowler tied for the field lead with six birdies. He shot a two-under 69, which has him in a tie for 8th place.

“I thought the course played great. You have to drive it in the fairway. That’s definitely key. I feel like I did a pretty good job of that, other than one hole. Happy about the start,” Fowler said.

There was only one bogey-free round at Quail Hollow today, and that came from Chris Stroud, who is coming in hot after winning last week’s opposite-field Barracuda Championship, his first career victory. Stroud added three birdies to post a 68, and he is just one back of the lead.

While Stroud had that incredible bogey-free round, a birdie-free round came from a very surprising place. Former PGA Champion Phil Mickelson continued his post-Bones slide, not adding a single circle to his scorecard in a terrible 8-over 79. 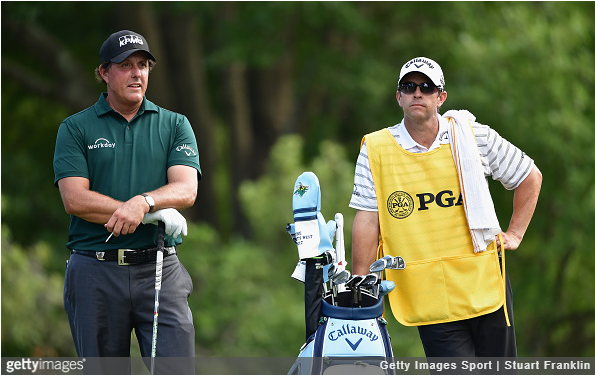 The 8-over tied his worst round in his more than two decades of majors.

Charley Hoffman has been red-hot lately, but put himself into a deep hole after a disappointing opening-round. Hoffman, who finished third at last week’s WGC-Bridgestone Championship, had just two birdies to six bogeys, adding to a 4-over 75.

Hitting just six of 14 fairways was among the bigger culprits for the poor opening score.

The young, long-hitting Belgian Thomas Pieters was a popular pick to take the PGA, after he was the 54-hole leader at the WGC-Bridgestone last week.

A nightmare start had Pieters at +5 through just six holes, and a late triple-bogey added another big number to the damage, as Pieters matched Mickelson’s 8-over 79.

It appears there will be no repeat champion this season. Defending champion Jimmy Walker floundered to an abysmal +10 81 in round one, and will likely need a very low round tomorrow just to make the cut.

All eyes this week are on 24-year-old reigning Open Champion Jordan Spieth, who would become the youngest winner of the career Grand Slam if we wins this week. 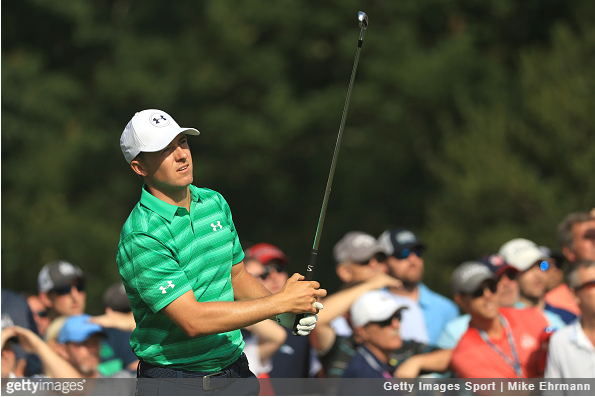 Spieth was ball-striking like a three-time major champion in round one, but was let down by a surprising club: his putter. 32 putts sabotaged an otherwise great effort in a 1-over 72.

“It was just the putter. Everything else was fine. I drove the ball well today. Struck it pretty good. It was really pleased — if you told me I was going to hit my driver the way that I did today, I would have definitely thought I shot a few under par which was an awesome score,” said Spieth. “I can’t putt any worse than I did today. The score won’t be any higher than it was today if I’m driving the ball like today.”

It could have been worse, though, as Spieth was at 3-over before birdies on two of his last three holes. Being five strokes back after 18 holes still has him right in the thick of the competition, but if he goes on to win, this would be his first major victory after sitting over par after the first round.

“It would mean a lot. I’ve had a couple of Top-10s in majors. I’ve had some good rounds in majors, and I feel like I’ve learned a lot over the years playing quite a few majors now. I feel like I’m better prepared to be in contention over the weekend and have a chance to win.”