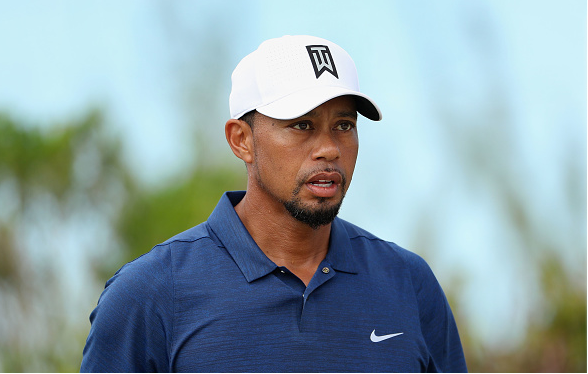 The life and times of Tiger Woods, post-2009, took another sad turn with his arrest over the holiday weekend for DUI. It’s been a very humiliating fall from grace for the former World No. 1.

Here’s a roundup of what the media is saying about the current predicament of Tiger Woods.

But then there was that photo — a police mugshot of one of the world’s most famous athletes, looking disheveled and glazed over.

For a man whose personal life has become a series of humiliations in varying degrees over the past decade, the photo offers tangible representation of that stark decline. It offers visual proof of the news, of another public embarrassment.

There is no positive way to spin this story.
–Jason Sobel, ESPN.com

The mug shot, not surprisingly, shows Woods as you have never seen him before.

It is disturbing. In it, the iconic golfer, 41, a single father of two children, wears a white T-shirt and he looks bloated, exhausted and unkempt…

In his playing prime, Woods spent his Memorial Day weekends playing in Jack Nicklaus’s Memorial tournament, which Woods has won a record five times, most recently in 2012. In Woods’s California youth, growing up as the son of an Army colonel who knew many who died in Vietnam and other wars, Memorial Day presumably had in his house its intended and serious meaning.

But his Memorial Day arrest, at a time in his life when he is recovering from surgery, is a stark reminder of where Woods’s life is right now.
–Michael Bamberger, Golf.com

What you are witnessing today before your very eyes is not just an individual who has fallen from grace, it’s an individual that finds it very difficult to look himself in the mirror, because he knows he got busted by the entire world for being the liar and the phony that he was at that particular moment in time.

Until he gets it out of his mind to get beyond that, until he gets back to the point where he can give two cents about what anybody thinks or what anybody says and just goes about the business of getting himself healthy, he is going to be an absolute mess.

The mug shot that will live forever (thanks to the Internet) of a disheveled and unshaven Woods looking into the police camera with hooded eyelids seared from the television screen. As ESPN’s David Lloyd intoned on SportsCenter late Monday morning. “THIS is the mug shot of Tiger Woods, one of the greatest players ever,” the camera slowly zoomed in for a close-up of the image, and then froze for a silent extra beat.

The man whose excellence as an athlete was built on his supreme self-control is not in control. And we may have reached a tipping point in which we will worry more about Woods as a person than as a golfer.

Just as in 2009, at the outset of his sex scandal, Woods has again reduced himself to a human piñata on social media. On a celebrity scale, his mug shot ranks somewhere between Nick Nolte’s and James Brown’s (you can Google them). And the next time Tiger tees it up on a golf course — assuming there is a next time — it’s likely that the same guy who shouts all those hopelessly annoying things on contact will attempt to sing a line or two from the national anthem … backwards, of course.

In other words, he has told us he is reckless, whether he’s dominating his sport or in too much pain from his back surgeries to play even nine competitive holes.
–Ian O’Connor, ESPN.com

Once the image of Tiger Woods — lithe, fit and triumphant in a slim-cut knit shirt and black Nike hat, flashing his bright white teeth — was emblematic of the American Dream. As he won four Masters Tournaments, three U.S. Opens and four PGA Championships, he seemed unstoppable and destined for sports immortality.

Photographs of the golfer sparked that special feeling of being in the presence of greatness.

On Monday, however, another image spoke of greatness squandered, a dream faded, a cultural hero’s decline and mortality.

It was his mug shot.
–Travis Andrews, Washington Post

How sad is this? How troubling? … What happened to the young man we all thought we knew, the one we saw in another photo in 1997, the most famous photo of Tiger there is? Only 21, pumping his fist, roaring in triumph after winning his first major tournament, the 1997 Masters?

Where has he gone?

What a stunning contrast these two photos are, taken 20 years and seven weeks apart. They chart the rise and fall of a man who had it all, then watched it crumble away, of his own doing.

Does the man in that Jupiter, Florida, booking photo look like someone with a real future in the game? If you saw Woods’ mug shot — everyone must’ve by now — it had to knock you back on your heels.

Somehow, Woods went from being the glorious embodiment of youthful promise to being 41 going on 60. The picture says 1,000 words, all of them sad and depressing.

The celebration of that chip-in at Augusta National’s 16th in 2005. His tears on the final green at Hoylake after winning the Open the following year, two months after the death of his father. Winning the US Open in 2008, when in such physical distress he barely had the use of his left leg.

In a parallel universe these would be the lingering snapshot memories of Tiger Woods but on Monday, regardless of all the glory and the 14 major titles, the image which will inevitably become a Tiger Woods reference for years to come arrived via a Florida police station. His face, bloated and disconsolate, said far more than the hardly insignificant cause of him being detained in the first place, an arrest for suspicion of driving under the influence.

There has been the chaos which engulfed his personal life in 2009 – and the cringe-inducing apology in front of a hand-picked audience.

However, for all the turmoil, injury battles and loss of form, this has to be Woods’s lowest ebb. From sporting icon – and an individual who once prided himself on being in peak physical condition – to the subject of pity and ridicule while only 41.

Sung-Jae Im Leads The Masters After Round 1