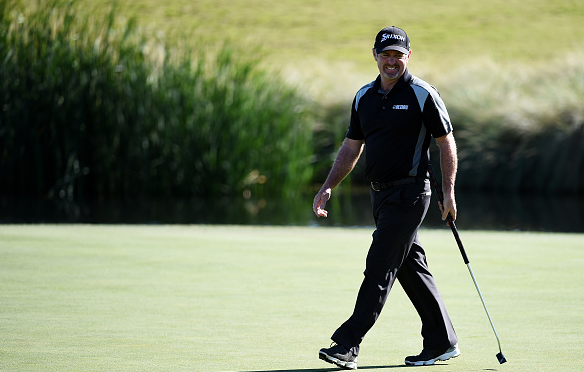 Now that the Chicago Cubs have finally claimed a championship, everyone thinks they can make the unlikely happen.

Roughly 14 hours after Joe Maddon’s gang exercised the longest-haunting demons in professional sports, journeyman Rod Pampling, who only made the field due to a clerical error, nearly forced his way into the 59 Club, one of the most exclusive fraternities in golf.

A 12-footer on 18 skidded just right of the hole, giving Pampling a very respectable 60, but kept him from becoming the seventh man to shoot 59 in PGA Tour history.

Still, Pampling, whose last eight years have been mostly a struggle, leads the Shriners Hospitals for Children Open in Las Vegas by two strokes over John Huh and Brooks Koepka, late in the first round, which has been suspended due to darkness. The day’s last group was on 14 when the round was called.

As would be expected of a round of 60, the 47-year-old Pampling was flawless on the day. The round featured seven birdies and two eagles, with one of those eagles nearly becoming an elusive albatross.

Pampling needed to play the last two holes at -1 to card a 59, but barely missed his birdie putts on 17 and 18. Surprisingly, he was just 5th in the field in birdies, but dominated in shots gained: tee to green, with an 8.102 in that statistic.

If the name Rod Pampling sounds vaguely familiar, there is good reason for it. Pampling first made headlines at the 1999 British Open (the Jean van de Velde Open) when he shot even-par to hold the lead by himself after 18 holes.

He would go on to somehow miss the cut.

Pampling would accumulate two wins on the PGA Tour: the 2004 International and the 2006 Bay Hill Invitational. Since that last victory, Pampling has been largely anonymous, perpetually holding a fringe playoff spot on the FedEx Cup standings.

Since 2013, the Aussie has bounced around different tours, most notably the Web.com Tour, where he had moderate success.

The 20-year-old Aaron Wise landed on the golf world’s radar earlier this year when he won the NCAA title last year at Oregon, and then declared pro just prior to the U.S. Open. He has been dominating the MacKenzie Tour with two victories among his seven top 10s in just eight events.

His first round 66 in Vegas marks the first time he has been in contention on the PGA Tour. It is his fifth career PGA event. The great round happened in spite of only hitting 4 of 14 fairways, as he did most of his damage on the greens, finishing second in the field in strokes gained: putting.

On the opposite end of the age spectrum, Davis Love III, the 52-year-old Ryder Cup captain put together a spectacular round 1, hitting 14 of 18 greens in regulation and posting a three-under 68. It was an impressive result for the man who has not made a cut since April.

Walker, the PGA Champion, did not take advantage of positive conditions, shooting a three-over 74. He was a disaster on the greens and carded five bogeys, among the most in the field.

Outside of a third place finish at the Deutsche Bank Classic, Walker has struggled since his breakthrough major victory.

Stuart Appleby, the Aussie Pampling nearly joined in the 59 Club, had the second-worst round in the field, a five-over 76. Combined with the 74th place finish he had at last week’s Sanderson Farms Championship, Appleby has not gotten his season off to the start he wanted.

“It’s a struggle, for sure. I’ve never played the week after coming home from those events. I’m usually done and I just come home and get to sleep till noon every day or whatever. It is a hard time change from there to here. Here to there, no problem. Coming back here, I struggle with it every single time. I can’t fall asleep at night, and I want to sleep in late.”
–Ryan Moore, on getting acclimated to playing in the U.S. after two weeks in Asia