PONTE VEDRA BEACH, Fla. – The PGA TOUR has released its 2016-17 season schedule of 47 FedExCup tournaments, several of which return to their traditional pre-Olympic dates and others that have a venue change and/or new title sponsor.

The first such change occurs the opening week of the season, with new sponsorship of the Safeway Open (October 13-16) at Silverado Resort and Spa in Napa, California, which also begins the TOUR’s seven-tournament run through November. After the schedule resumes in January, another new title sponsor emerges with the Genesis Open at The Riviera Country Club in Los Angeles (February 16-19). The sponsorship by Genesis, a luxury car brand, was announced earlier.

Next comes the relocation and renaming of the World Golf Championships-Mexico Championship (March 2-5), which moves from South Florida to Mexico City through a new seven-year sponsorship agreement with Grupo Salinas. The host facility has yet to be named. 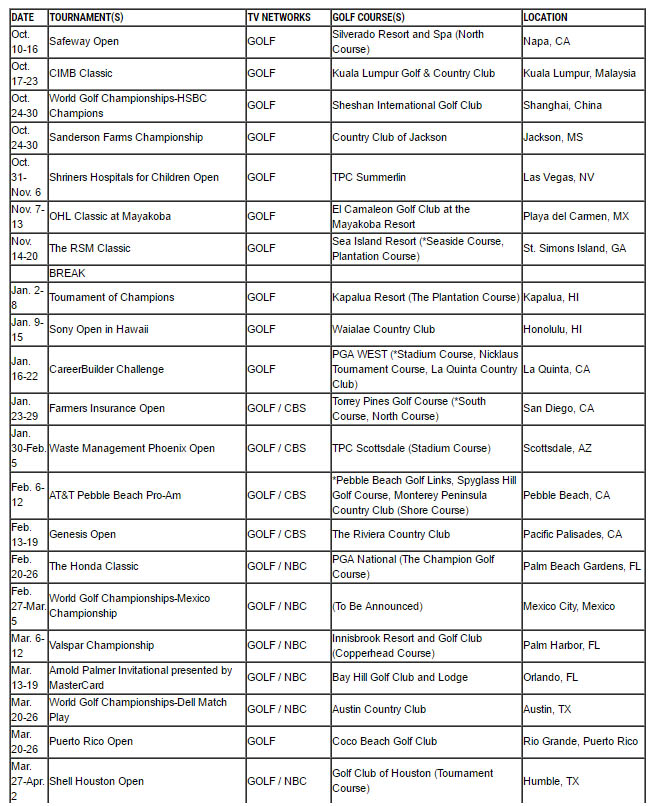 The following week, THE PLAYERS Championship returns to a Mother’s Day Sunday finish (May 14) and will greet the season’s strongest field with totally resurfaced greens, including some with contour changes, and a redesigned, drivable par-4 12th hole.

The U.S. Open will be held at Erin Hills in Hartford, Wisconsin, for the first time, June 15-18, while The Open Championship is scheduled for July 20-23 at Royal Birkdale in Lancashire, England. The PGA Championship returns to August (10-13) after moving to July in 2016 to accommodate golf’s return to the Olympic Games in Rio de Janeiro.

Also during this portion of the schedule, the Quicken Loans National (June 29-July 2) will be held for the first time at TPC Potomac at Avenel Farm. The final changes on the schedule involve the opening FedExCup Playoffs event, THE NORTHERN TRUST (August 24-27), which features a new sponsor and new course, Glen Oaks Club in Old Westbury, New York. 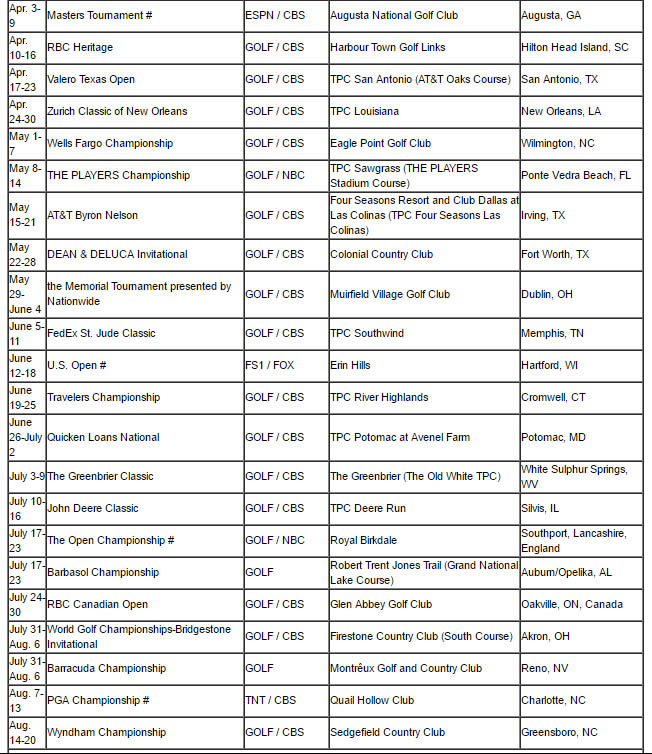 The Playoffs continue the next week with the Deutsche Bank Championship’s traditional Monday finish on September 4 before taking a one-week break. The Playoffs then resume with the BMW Championship (September 14-17), which returns to Conway Farms Golf Club near Chicago, and conclude September 21-24 with the TOUR Championship. The very next week, The Presidents Cup will be held at Liberty National Golf Club in Jersey City, New Jersey.

Jay Monahan: From Tough Guy Who’s “Moving On” to Crybaby Who “Can’t Compete”

After Criticizing LIV Golf, the PGA Tour Basically Does a Copy, Paste