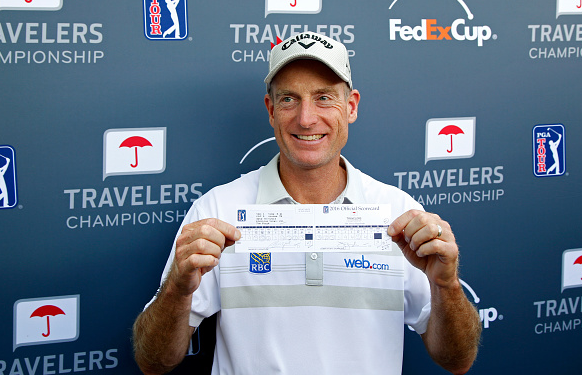 Jim Furyk shot a 12-under 58 on Sunday during the final round of the Travelers Championship. The 46 year-old Furyk is the only player ever to shoot a 58 in a PGA Tour event.

After they wrapped up their 18 holes today, many of the players were asked to comment on Furyk’s record-breaking feat. Here’s a round up of some of the quotes.

“He made an eagle on No. 3, and after that eagle we talked about that he could make everything, because he was in the zone. We thought he could make everything, but not as many as he finally did. We were seeing the best golf round in the history of golf, and actually we talked about that since hole No. 9 when he finished. He made a birdie for 8-under, and we said, if he makes three or four more under, he’s going to be the best round in history… The crowd was so loud, and at the 18th we decide today go first because we knew how it was going to be. Yeah, but we were like witnesses. We were part of the crowd cheering for him.”

“I told Jimmy, my caddie, I wasn’t going to look at leaderboards today, and then going to the first tee and I hear what he’s doing, and I’m like, well, I have to look now just because I wanted to watch history. Weber and Paul and Jay and I, we were all egging him on and pulling for him. Not often do you shoot 62 and get your butt handed to you.”

“Don’t ask me how you have a 58, okay, because it’s one less than 59… That’s amazing. Great effort. I mean, I played really — Jim beat me by 10 shots on the front nine. I finished my nine holes and looked at the number and went, oh, 37; didn’t he have 27? Yeah, obviously the course was a lot easier in the morning (laughter), somewhere around 15 shots. It’s great. Unfortunately now it’s the old number. 59s are like dog’s breakfast, just all done, put them on the ground.”

“It was amazing. I mean, you know what, it was funny to watch the whole — everybody that hadn’t teed off watching and going through the locker room, going through the lunchroom, on the range, talking about what Furyk was doing. It’s amazing to see a guy like that — I would say he’s a perfectionist. He plays the golf course the way he plays it. And to see that, the second time shooting in the 50s, what an amazing feat that is. No, it’s special. You know when it’s something special because all the players are talking about it in the clubhouse there.”

“Well, I actually wanted to go out and — I was on the range when it happened. I wish I had time because I would have loved to be on the 18th green when that went down. Who knows when we’re going to get to see that again. Hats off to him. Two rounds in the 50s, you can’t say enough about that man. He is an animal. I birdied the first two. I was like, I’m coming to get you. But yeah, it didn’t happen.”

“It’s impressive. I mean, it’s impressive. He’s had a 59 before and now a 58. Really, he birdied the harder holes. He didn’t birdie like 13 and 15, the two easy holes on the back nine. He didn’t even birdie those. It could have been really, really low. I would have loved to have signed a scorecard for a 58 on Sunday and walked away and not even showed up.”

On Twitter, many more players checked in with some comments and congrats.

Wow. Congrats to Jim Furyk. What a round of golf. First to shoot 58 on tour and becomes first man to shoot in 50's twice! #balling

Hundreds of thousands of rounds played on TOUR. Would be pretty cool to say that you shot the lowest round ever. Congrats Jim and Fluff!

Congrats to my friend Jim Furyk on an historical round! 58!! And also Mike Cowan on being apart of it! Helluva job boys!

Massive respect. Jim Furyk lowest score ever on the @PGATOUR that sir is class… #TakeaBow