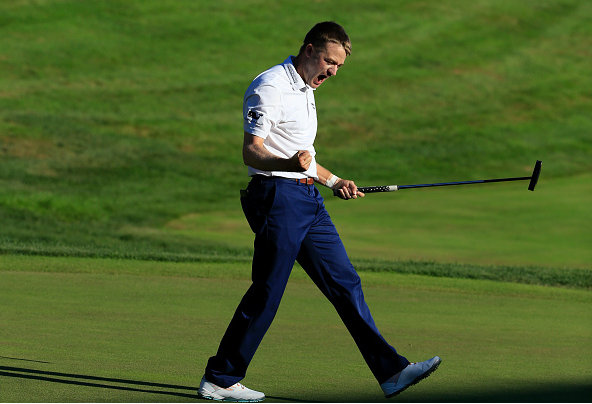 Yesterday in this spot was a blurb noting that the man in 70th place, Jim Furyk, was projected to have played himself out of the top 125 of the FedEx Cup standings.

It was the closest thing to notable that could be said about the 46-year-old Furyk after a 2-over round he did not factor at all in, a common theme for the man who was having his most anonymous season since the mid-90s, a season that he had missed three months of in recovery from a wrist injury.

Then came today. Furyk shot a round, THE round, that took the attention of the sports world away from the Olympic Games, and to central Connecticut. Furyk fired a 58, the single lowest round of the million-plus rounds that have been played in PGA History. It was not enough to win the Travelers Championship, but it was enough to become immortal in PGA Tour lore.

There was a tournament outside of Furyk, even if everyone was too in awe of what had happened that morning to notice.

Scotland’s Russell Knox came out in front of a congested leaderboard, shooting a 2-under 68 to win the Travelers Championship by one stroke over Jerry Kelly, two over Justin Thomas and Patrick Rodgers, and three ahead of Mr. 58, the man who stole all the headlines.

HOW KNOX DID IT

Knox won playing a near identical front and back nines, with two birdies and a bogey on both. At the second shortest course on tour, everyone knew ball-striking would be critical, and Knox did that better than anyone over four days, finishing in the top 5 in both strokes gained: tee to green, and strokes gained: approach the green.

He did not make it look easy, however. He played the final four holes at one-over, then on 18, he hit his approach shot into the greenside bunker. He hit his bunker shot to 12 feet from the hole, then exploded in celebration as that putt slowly reached the bottom of the cup.

WHAT IT MEANS FOR KNOX

This was the second victory of the season for Knox, who was also victorious at the WGC-HSBC Champions at November in Shanghai, another tournament in which he closed with a 68. Knox, who was already in the top 10 of the FedEx Cup standings, rose to #4, and only trails Jason Day, Dustin Johnson, and Adam Scott, the three other golfers with two wins on the season.

It gives Knox a tremendous advantage in getting to the Tour Championship in Atlanta. It also makes Knox relevant in the Ryder Cup talk. He started the day a considerable ways back (30th place), but now he is at least on the radar for a Team Europe captain’s pick.

Jim Furyk was stories A, B, and C today, but if there was a story D, it was the play of Daniel Berger. After 54 holes, American Daniel Berger, who won the FedEx St. Jude classic in June, held a three stroke lead.

However, on a day where scoring was low, and for some VERY low, Berger disappointed with a 4-over 74. The 23-year-old went into a back nine tailspin, with bogeys on 10, 11, 12, and 13. Two birdies in the final five holes was not enough to get back out front.

Berger was being talked about yesterday as a potential Ryder Cup participant for the U.S. Now, some of the guys on the bubble, particularly Bubba Watson and Rickie Fowler, can breathe slightly easier, although Berger has just been replaced in the talks by Furyk.

Sunday’s final round marked the last round of competitive golf that three of the four American Olympic representatives, Bubba Watson, Patrick Reed, and Matt Kuchar, will play before teeing it up in Rio in the upcoming week.

None of the three did anything to significantly raise or lower Olympic expectations. The youngest of the three, Reed, was also the best. A bogey-free round of 66 put Reed in a tie for 11th place, just barely missing out on his 10th top-10 of the season.

Kuchar was next best of the three, as an eagle on the 15th hole was the key to a final round 65. He finished in a tie for 17th. Watson, who was also the defending champion, shot a 2-under 68 to finish T25. He still does not have a top 10 since March.

With only a few weeks left until the FedEx Cup playoffs start, a number of players helped or hurt their individual standing. The biggest positive mover was Robert Garrigus, whose fifth place finish moved him from outside the top 125 (133rd) to inside (116th).

Blayne Barber (126 to 122) and Chris Stroud (132 to 123) were the only other golfers to play themselves into the top 125. Matt Jones (124 to 126) moved himself out for the moment, while Padraig Harrington and Sung Kang were among those who missed great opportunities to get into the mix.

“It’s never easy. I was in this position in Mexico and wasn’t able to make a par, and man that putt, I’ll remember that one forever.”
– Russell Knox