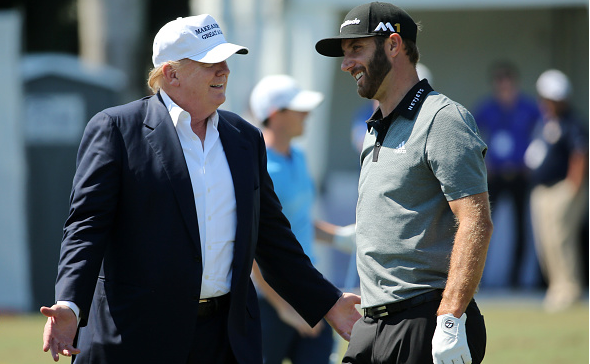 Dustin Johnson won his 20th PGA Tour title on Sunday at the WGC-Mexico Championship. The world No.2 was congratulated on Twitter by President Donald Trump.

Congratulations to @DJohnsonPGA on his 20th PGA Tour WIN. Not only is Dustin a truly great golfer, he is a wonderful guy. Big year ahead for Dustin!

DJ is one of the many Tour stars who has golfed with Trump following his victory over Hillary Clinton in the 2016 presidential race.

The win in Mexico City was DJ’s sixth WGC title, and third in this particular event alone, the first of which occurred in 2015 when it was titled the WGC-Cadillac Championship, and contested at Doral Trump National.

The 2016 WGC tournament, with DJ as the defending champion, was the last edition of the event contested in Miami. Then candidate Trump made an appearance wearing a (white) MAGA hat.

Trump’s most recent public appearance related to the PGA Tour occurred in 2017 at Liberty National (NJ) when he awarded the U.S. team with the Presidents Trophy.

The Trump Organization oversees 17 championship golf courses and clubs. One of the newest is the Trump Golf Links at Ferry Point, which opened in 2015. Recently, in the summer of 2018, it debuted a new clubhouse with Trump golf/business associates DJ, Bryson DeChambeau and Jack Nicklaus on hand for the grand opening.