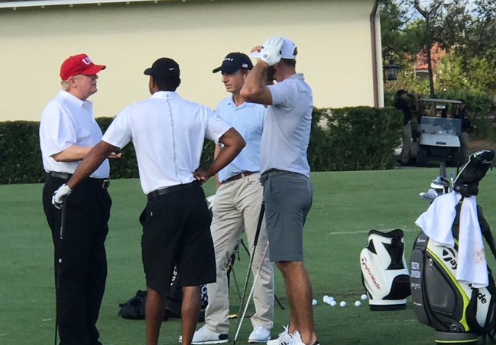 President Donald Trump is down at his Mar-o-Lago estate in Palm Beach, Florida for the long Thanksgiving weekend.

On Thursday, the president made a surprise visit to a South Florida Coast Guard station, and spoke to U.S. military members stationed in Afghanistan via video hookup.

Then on Friday, the 45th POTUS teed it up for a “quick” round with Tiger Woods and Dustin Johnson at Trump National in Jupiter, per a tweet from the president.

After Turkey call I will be heading over to Trump National Golf Club, Jupiter, to play golf (quickly) with Tiger Woods and Dustin Johnson. Then back to Mar-a-Lago for talks on bringing even more jobs and companies back to the USA!

Brad Faxon, of FOX Sports, also joined to make it a foursome.

Trump also recently played with Hideki Matsuyama on his trip to Japan. And it’s the second time he’s teed it up with Woods in the past year. He’s also played a round with Rory McIlroy and fellow Floridian Lexi Thompson.

WITB: Dustin Johnson Wins the Travelers With a Full Bag of TaylorMade